When the decision was made to rehabilitate turbine runners on five units at Ontario Power Generation’s 174-MW Sir Adam Beck Pump Generating Station, this gave operators an opportunity to increase the plant’s efficiency and discharge by reintroducing adjustable flaps in the stay vane outlets, which had long since been welded in a fixed position. The overhaul required runner refurbishment, computational fluid dynamics studies, design of a flaps control system and extensive testing to best determine how to optimize the Sir Adam Beck Pump Generating Station’s unit productivity.

Commissioned in 1958, the pumping station uses an uncommon Deriaz-type runner that was designed and tested by English Electric. Deriaz runners (see Figure 1 on page 10) are diagonal-flow double-regulated turbines with hydraulic passages oriented at a 45-degree angle from the turbine axis.

A flap over flaps

The flaps are devices installed at the stay vanes outlet; their role is to keep the hydraulic flow at the right angle whatever are the operating conditions. In Deriaz original design, the flaps should be able to operate continuously in their range. For reasons unknown to OPG, the Sir Adam Beck Deriaz units were commissioned with flaps taking only two positions: either “in line” with the hydraulic profile of the stay vanes or “fully deflected” to a more radial position to accommodate higher discharges and lower head ranges.

The flaps were welded in their in-line position against mechanical stoppers during the 1980s because the cost of maintaining the flap control system was too high compared to the gain achieved by operating them with only two positions.

The decision to bring back the flaps operation to its original intent came into question when OPG began considering a rehabilitation of the pumped-storage station, culminating with a pair of studies conducted by Alstom in 2012.

The first study aimed to improve the blade profile, while the second sought to discover potential performance increases that might be achieved should the adjustable flaps be put back into service with a continuous range of position.

The possibilities of improving the blade design were limited because the runner’s hub profile could not be easily changed and because the blades were required to tightly close on each other. The blades play the role of the wicket gates in Francis turbine.

Due to this limitation, Alstom primarily worked on redesigning the leading and trailing edges to reduce cavitation. The original blades were circular and thus with more risk to induce cavitation. Alstom changed these to elliptical profiles, eliminating some cavitation, but not the maximum possible.

Given the plant’s increased potential for operating over a larger range, OPG decided to refurbish the plant through several types of work, including:

– Refurbishing of the existing adjustable flaps; and

The atypical design of the Deriaz runner relies on a rotating servomotor that controls the angle of eight blades. The central part of the runner is composed of a rotor with four arms and a static part with four vanes. To open or close the blades, oil is pressurized and transmitted through the shaft to four opening or closing chambers.

An arrangement of bronze segments is pressurized by valves to provide the sealing between each pair of chambers. Subsequently, the rotation movement is transmitted by a central component called a “spider” to the eight levers and finally to the blades. Special care was taken regarding sealing of the servomotor not only to reduce oil leakage but also to increase the cycling period of the runner hydraulic power unit. 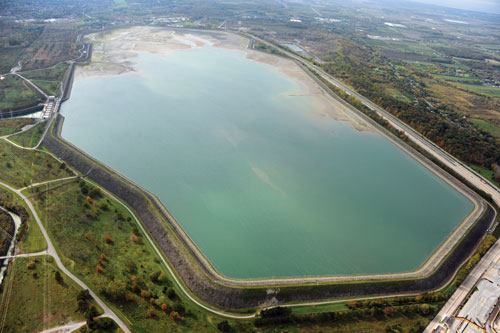 During the rehab, all parts were inspected, repaired and machined before the unit was reassembled. The alignment of the blade holes was also verified with a laser tracker and new bronze bushings were installed. The contact surfaces between each blade were also checked to improve sealing.

Fixing and reinstating the flaps

Based on Alstom’s CFD studies, rehabilitation of the flap was crucial to improving performance of the unit.

The first challenge was to dismantle the flaps. OPG, which led this part of the operation, used arc gouging to remove the welds, which caused damage to the stoppers and their flaps. On site, OPG took care to rebuild the upper stopper, while Alstom was responsible for the rehabilitation and supply of other parts.

The reused parts in the flap system were fully cleaned and inspected by non-destructive examinations. Detected defects were repaired, and areas damaged by the gouging were rebuilt.

The flaps were then machined to adapt new stainless steel sleeves on their top and bottom trunnions to prevent corrosion. Bronze bushings were also replaced with self-lubricating bearings, and seals were installed to prevent particle contamination and water infiltration and to preserve the bearings’ integrity.

When considering the programmable logic control (PLC) system’s design, consideration had to be given to the flaps’ control with regard to both the blade angle and to the other flaps’ positions. This required additional precision control of the flaps to ensure the proper positions were maintained during the movement from one position to another, as well as at rest.

Special care was given to the PLC program so multiple algorithms can continuously monitor system conditions simultaneously, meaning instant adjustments can be made to individual flaps or to all flap positions as a group. 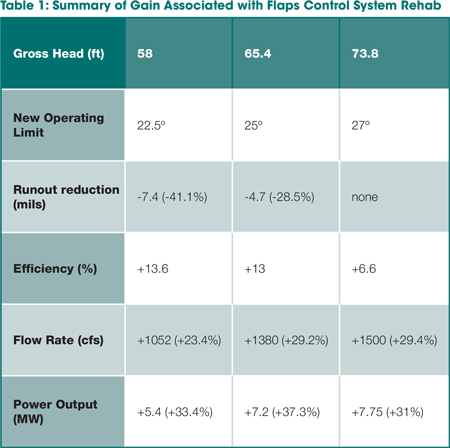 This is not only important during normal operation, but also in response to any of the many conditions that result in an incorrect or unknown flap position, such as mechanical failure, foreign objects, electrical component or signal failures, or data communication loss and data corruption.

Flap position is determined using cam curves, with five curves programmed into the PLC. Each curve gives the flaps’ position in function of the blade angle for a given gross head. The algorithm developed linearly interpolates between the curves to find the flaps’ position during operation.

To find the optimum cam curve and evaluate the associated gain, Alstom needed to measure the power output, flow, gross head, and blade and flap positions. These values were read directly through the new PLC using a Modbus signal converter.

To build the cam curve in generating and pumping mode, it was necessary to conduct the test at three gross heads (73.8 feet, 65.4 feet and 58 feet). This was a challenge because the gross head changes at a rate of about 4 feet in 30 minutes with all units in generating mode at their best efficiency point.

However, OPG made it possible by stopping all the units except the one tested over a three-day period, allowing measurements at a constant head. The test in pumping mode offered Alstom less flexibility, with measurements done during one night for each of the three head levels (see Table 1).

For each head, the blades were kept at a given angle, while different angles for the flaps were tested. For each combination of positions, data were recorded for two minutes. Fast treatment of the data allowed building performance curves almost in real time. 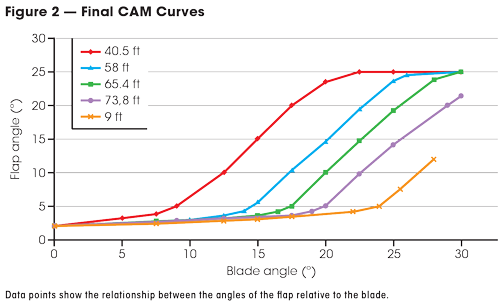 Results of the testing in generation mode show important gains were achieved (see Figure 2 on page 10). In fact the flaps allowed the unit to operate in a wider range thanks to a decrease of the unit vibration. The units operation was until then limited to a maximum blade opening of 22 degrees. In fact, with the flaps welded the hydraulic angles were not aligned between the flaps outlet and runner blade inlet, thus causing instabilities.

With flaps against their stoppers, the turbine shaft run out reached 16 millimeters. With flaps in operation, allowing a proper alignment at the runner inlet, the run out is reduced almost by half, thus allowing an increase the blade opening, and thus discharge.

Taking into account both the performance increase and the wider operating range, the project lead to an increase of maximum power output by 37%, maximum flow by 27% and efficiency by 13%.

Meanwhile, no measurable gains were observed under test conditions in pumping mode.

The refurbishment of the first runner at the Sir Adam Beck Pump Generating Station was a success. The work done by Alstom on the runner and design of the new flaps control system and by OPG at the site brought back a unit with improved performance.

The rehabilitation project will not only bring important gains for Sir Adam Beck’s pumped-storage plant, but also Plants 1 and 2 downstream.

The augmented discharge at PGS will allow a more flexible management during the peak period. In fact, OPG will be able to turbine more water at plant 1 and 2 while respecting the level constrain in the derivation channel feeding the units.

The installation at site of the second rehabilitated runner is currently on going. Relative performance test will be conducted on that second unit in November 2015. Three more units will be rehabilitated at a rate of one per year.