The Snoqualmie Falls project in Washington State has undergone an extensive renovation and upgrade program that includes additional power generation, an enhanced experience for visitors and better fish protection.

Puget Sound Energy’s (PSE) historic Snoqualmie Falls project is home to two power plants. Plant 1 was built in 1898 inside a bedrock cavity 260 feet below ground at the edge of the falls. The second powerhouse, Plant 2, a quarter-mile downstream from the falls, was built in 1910 and expanded in 1957. The facility is a vital piece of the company’s generation and renewable energy portfolio. It’s also been PSE’s lowest cost power provider, but like many hydro plants around the U.S., it was showing its age. The plant needed upgrades to improve efficiency, capacity and safety. 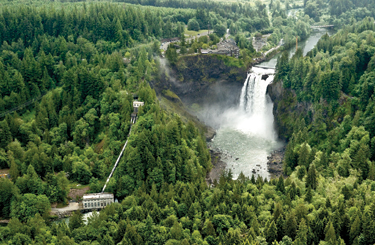 After PSE received a new 40-year operating license from the Federal Energy Regulatory Commission in 2004, the company began a collaborative, comprehensive redevelopment process that was completed in the summer of 2013. The project has resulted not only in additional megawatts of clean, reliable power, but in an enhanced visitor experience and better fish protection.

PSE’s upgrades to the two hydropower plants included replacing two turbine-generator units and refurbishing the remaining units to be more efficient, as well as replacing the aging penstocks that carry water to both powerhouses. One of the larger engineering feats involved building a new steel and concrete intake structure that channels water into the 1,200-foot-long underground tunnel. This 12-foot-diameter tunnel was relined and now delivers water to a rebuilt gate house located above Plant 2. The new gate house was outfitted with automatic shutoff gates to quickly and safely halt the flow of water if an earthquake or other emergency ever caused a major leak in the penstocks.

Plant 2 went offline for renovation in 2010 and re-started in April 2013. Plant 1 came back into service last summer. Combined, there is a generating capacity of 54 MW, compared to 44 MW previously. The 20% increase in rated output will raise the total output enough to serve about 40,000 homes, without using any additional water.

Aside from the powerhouse upgrades, PSE also refurbished the existing concrete diversion dam that spans the Snoqualmie River just upstream from the crest of Snoqualmie Falls. The dam, which varies in height between 5 feet and 18 feet, was lowered by 2 feet and lengthened by 37 feet. This resizing reduces the crest of flood waters by 6 to 8 inches in the upstream city of Snoqualmie while providing better water conveyance to the two powerhouses.

A new bypass flow-control system was added to the rebuilt Plant 2. Now if either generator is shut down abruptly, the system transfers water so there is continuity in water flow and fish (primarily chinook salmon and steelhead trout) won’t experience a drop in the river level. To further protect the fish, PSE modified the Plant 1 tailrace at the base of the falls so there were no pockets or ponds where fish could get trapped.

In addition to giving the region clean, carbon-free energy for the past century, Snoqualmie Falls is also a scenic and cultural treasure. With the renewed operating license, PSE took the opportunity to reinvent the surrounding park and public areas to make them better for visitors, outdoor enthusiasts and wildlife, and to celebrate the history and heritage of the area. The company consulted with public agencies, non-profits, the Snoqualmie Tribe and other citizen groups to ensure that the recreation, cultural and environmental needs of the community were accounted for.

PSE added a number of visitor amenities and park improvements in the lower, riverside portion of Snoqualmie Falls Park, including a new boardwalk to a platform to view the falls and new hiking trails to connect the park’s upper and lower sections. New interpretive and educational signage communicates the historical, cultural and environmental significance of the site. Whitewater enthusiasts now enjoy improved riverfront access and park visitors enjoy new landscaping, lighting, fencing and viewpoints. The company has also worked to eliminate invasive plant species and replace them with native species along the river’s shore.

Upstream from Snoqualmie Falls, PSE renovated the project’s original train depot and carpenter shop. The renovated buildings are now up to code but have retained their historical elements. Displays provided by PSE showcase Snoqualmie Falls artifacts and historical photos for visitors.

PSE’s obligation is to not only deliver safe, reliable power but to do it in a way that protects and enhances the environment and community. The redevelopment of the Snoqualmie Falls hydro project is a great example of this principle in action. The project combines modern-day engineering with the history and heritage of the Snoqualmie Falls area and its people. The company is proud to carry this strong legacy forward into the next century.

Several companies worked on the rehabilitation and upgrade work recently completed at the Snoqualmie Falls projects. They include, but are not limited to: