A crack discovered in one of spillway monoliths at Wanapum Dam led to a need to stabilize the structure and prevent further damage. Grant County Public Utility District worked to investigate the problem, install anchors to stabilize the dam, and return the powerhouse to full operations.

Grant County Public Utility District operations personnel noticed downstream movement of the spillway roadway deck and guard railings at Wanapum Dam at the end of February 2014. Two days later, inspections by divers revealed the Monolith 4 concrete lift joint at Elevation 485 feet had opened 2 inches and the upper part of the pier had displaced downstream about 1.5 in.

The reservoir was near normal maximum elevation (571.5 ft). Computations by MWH, the Federal Energy Regulatory Commission (FERC) and the district’s board of consultants indicated lowering the reservoir 27 ft would provide an acceptable, temporary factor of safety against sliding and rotation failure modes. The crack closed significantly during reservoir lowering. Divers placed a temporary seal over the upstream face of the joint once the monolith was determined stable, and the crack closed to about 1/8 in. Now, work to develop a remediation plan could begin. 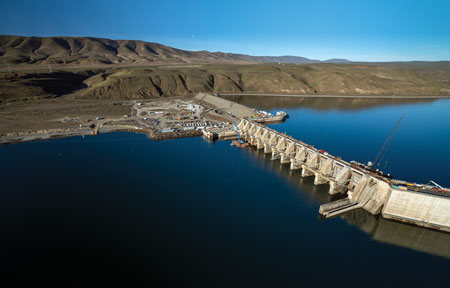 Wanapum – a FERC-licensed, 1,092 MW hydro project on the Columbia River – was completed in 1963 and consists of left and right earth embankments, left and right bank fish ladders, a concrete gravity spillway, a 10-unit reinforced concrete powerhouse, and a future unit intake section.

The spillway has 12 radial gates, each 50 ft wide by 67 ft high. A concrete stilling basin slab provides energy dissipation and hydraulic control (see Figure 1 on page 12). Spillway monoliths 2 through 12 are 65 ft wide, have a 15-ft-wide center pier with half a gate bay on each side, and are separated from adjacent monoliths by contraction joints. Ogee height is nominally 55 ft but deepens to 75 ft on the right end. Monoliths 1 and 13 comprise the right and left ends of the spillway, respectively, and contain half a gate bay. A 5-ft-wide by 10-ft-tall grouting and drainage gallery runs the length of the spillway.

The Wanapum spillway is founded on fine-grained basalt flow, which at the site is hard, strong and primarily unweathered. The basalt contains medium to large near-vertical joints typical of columnar jointing but is relatively massive and overlays a layer of a brecciated mass of basalt, scoria and pumice fragments cemented together by weak chlorite. Below the brecciated basalt is a layer of higher quality, fine-grained basalt.

The district’s objectives were, in order, public safety, protecting environmental and cultural resources, restoring fish passage, restoring power production, and cost effectiveness of repairs. The district retained MWH to investigate repair alternatives and model the cracked monolith. An independent board of consultants was hired to review processes and designs. Kuney-Goebel JV was mobilized in preparation for constructing the selected repairs. Nicholson Construction was hired when it became obvious that installation of post-tensioned anchors would be part of the repair solution.

Stability enhancements were required for all monoliths. Because cracking and opening of a lift joint destabilized Monolith 4, a method was needed to detect such cracking and relieve water pressure. Nicholson drilled vertical holes from the gallery upwards, intersecting the lift joints above the gallery. Typically seven lift joint drain holes were installed in each monolith, inclined toward the upstream face, and monitoring of flow from the holes was added to the district’s surveillance and monitoring plan. Immediately downstream of the lift joint drains, monitoring holes with pressure gages were installed to determine the drains’ effectiveness in reducing uplift pressures.

Spillway remediation and post-tensioned anchor design began by evaluating Monolith 4 using ANSYS, a nonlinear, 3D finite element analysis (FEA) model. Because the cracked monolith allowed hydrostatic pressure within the ogee body, the design needed to keep the crack closed and prohibit reservoir pressure from migrating further downstream. Exploratory holes drilled into the ogee by Nicholson revealed that the crack extended along the construction lift joint and then sloped downstream, following a path below the vertical pier reinforcing terminations (see Figure 2 on page 14).

Spillway remediation and anchor design were evaluated, and the application of appropriate safety factors. The FEA approach incorporated PFMs by modeling interfaces at discrete cracks, key lift joints and the concrete/rock interface. Results were evaluated as to whether other PFMs could occur.

Thermal analysis was performed using the ANSYS FEA approach to determine seasonal temperature variations in the spillway monoliths. Ambient air and reservoir water temperatures were incorporated. The thermal model was calibrated without the damage with respect to historical seasonal measurements from pier surveys as part of the validation process. A thermal crack of a specific depth was incorporated in the model after the thermal calibration was completed.

Temperature effects could result in cracking along a lift joint, which may alter the uplift distribution pattern. The results of the heat flow and stress analyses indicate the monolith experiences annual cyclic thermal stresses, which vary from upstream face compressive stresses during warm weather to tensile stresses during cold weather (that overwhelm the static stresses).

Thermal FEA analysis showed that during winter, the ogee concrete above the open crack lifts up locally as a result of the temperature differential between the ogee surface and interior concrete. Therefore, winter temperatures were combined with static loadings in the remedial design FEA model of Monolith 4. Design of this model involved the following key assumptions:

Key requirements for static stability for the Wanapum spillway were that force (sliding) and moment (overturning) equilibrium be maintained with adequate factors of safety per FERC guidelines. It was critical that the design address the failure mechanisms theorized to cause the spillway movement, e.g., thermally induced tensile operating stresses on the upstream face of the ogee (estimated to be 250 psi during the winter) and tensile stresses on the monolith as a result of normal operating loads (35 psi).

To evaluate effects of the maximum design earthquake (MDE), time histories were developed to determine the dynamic stability of the remedial spillway strengthening. The earthquakes were developed under FERC engineering guidelines.1,2 The design considered three spectrally matched, deterministic seismic events – two crustal events and one interface (subduction zone) event – and a fourth time history developed by scaling to the crustal response spectrum.

To satisfy overturning and sliding stability requirements for static and seismic load conditions for Monolith 4, three post-tensioned 61-strand rock anchors near the upstream end of the pier; eight 3-in post-tensioned bar rock anchors at the upstream side of the ogee; twelve 2.5-in and 3-in post-tensioned bar concrete anchors upstream of the gate near the contraction joints; and 20 3-in post-tensioned bar concrete anchors perpendicular to the face of the downstream ogee were required. With these anchors, downstream seismic-induced movement was limited to less than 1.5 in at the base and to about 0.5 in of differential movement from above and below the crack. Figures 2 and 3 show Monolith 4 anchor configuration and locations. Post-earthquake stability requirements in accordance with FERC guidelines were also satisfied.

The crack was treated by patching and sealing at El. 485 and at the contraction joints along the upstream face with gasketed seals, and cement grout was injected.

“Typical monoliths” 3 and 5 through 12 had no apparent damage, so the design philosophy was to preclude cracking from propagating downstream, prohibiting the Monolith 4-like failure mode. The typical monoliths were evaluated with a nonlinear FEA model, developed without a crack extending downstream along the ogee but allowed to open along a lift joint if subjected to overstressing. Typical monoliths were evaluated with a lift joint having zero tensile strength. Pier strand anchors are provided to prevent a failure mode similar to Monolith 4.

The load cases were the same as indicated for Monolith 4, including the MDE. Post-earthquake case analysis was performed considering damage that may have occurred during the earthquake. A structural analysis was performed to estimate the depth of an initial thermal crack, which varied from 7 ft at lower elevations to 12 ft at the El. 485 lift joint. These thermal-affected zones at lift joints were pressurized with headwater in subsequent FEA.

Assumptions made for the typical monoliths are similar to Monolith 4 except that the effectiveness for the new lift joint drains was taken as 25% based on field testing.

Three post-tensioned, multi-strand rock anchors at the upstream end of each pier of the undamaged monoliths (see Figure 3 on page 16) and two post-tensioned bar rock anchors at the upstream side of the ogee were required to satisfy overturning and sliding stability requirements for operating load conditions. These anchors limit total downstream movement to about 1 in at the base during the evaluated seismic events. Post-earthquake stability requirements per FERC guidelines have also been satisfied.

Strand anchors in the pier were slightly inclined from the vertical to avoid interference between the new lift joint drain holes and existing gallery. Bar anchors near the upstream face of the ogee were installed vertically.

Post-tensioned-type anchors consisting of seven-wire low-relaxation strand conforming to ASTM A416, Grade 270 were installed in the top of the pier and extended into rock below the ogee (see Figure 2 on page 14). The strands are 0.6-in-diameter with a guaranteed ultimate tensile strength (GUTS) of 58.6 kips. The design anchor load was taken as 60% of the GUTS of the tendon. Three 61-strand anchors were required in each pier of each monolith (except for Monoliths 1 and 13) for a total tendon design load of 6,432 kips per pier.

The strand anchors were spaced to avoid excessive anchorage local zone stresses (concrete bearing) and general zone stresses (tension bursting, spalling and edge tension), per American Concrete Institute and Post Tensioning Institute recommendations3,4 and to avoid the drill hole intercepting vertical rebar in the pier nose and around the gallery.

A nominal bond length of 35 ft was established for the strand anchors and they extended 81 to 119 ft into rock underlying the spillway for total lengths of 220 to 260 ft.

The bar anchors installed in the upstream face of the ogee were 3-in diameter conforming to ASTM A722, Grade 150 ksi. The 3-in bar has a design load of 581 kips (60% of the GUTS). Two ogee bar anchors were required in the pier for the typical monoliths. Monolith 4 had 40 bar anchors to help “stitch” closed the crack. Most of the bar anchors were drilled underwater with specialty drill equipment and dive crews.

The computed bond length for the 3-in bar rock anchor was 14 ft, with total lengths ranging from 79 ft to 101 ft.

The design was sequenced to install those anchors necessary to raise the reservoir about 17 ft, allowing normal operation of the fish passage facilities and reducing impacts to the hydroelectric system. Temporary load cases were applied to the FEA models to determine the minimum number of anchors needed to raise the pool to the intermediate level.

In combination with rigid body and sensitivity analyses, it was determined that one multi-strand anchor was required in each Pier 2 through 12, except Pier 4, where three multi-strand anchors were needed. No anchors were required for Piers 1 and 13. In Monolith 4, to install the upstream and downstream bulkheads, four upstream bar rock anchors were needed before the intermediate pool raise. The raise to El. 562 occurred over the 2014 Thanksgiving holiday.

After installation of the remaining strand and bar anchors in all monoliths, the reservoir was raised to El. 571.5 in March 2015.

The authors wish to acknowledge the leadership of Kevin Marshall and Dave Mishalanie of Grant County PUD and Greg Rollins of MWH; technical input from the board of consultants (Guy Lund, Robert Hall and Kim de Rubertis); and FERC’s helpful, timely response – which allowed the plant to come to full operation in 13 months.