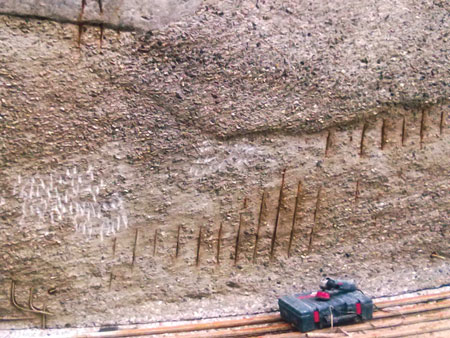 Nathpa Jhakri is a concrete gravity dam on the Satluj River in Himachal Pradesh, India, about 500 km northwest of Delhi. The primary purpose of the dam, which was completed in 2004, is to impound a reservoir that supplies water for a 1,500-MW (2,000,000 hp) underground hydropower station.

Water flows through the site at high velocity and contains significant silt content. Over time, this has resulted in significant erosion of the dam’s concrete spillway piers. Owner SJVN needed to remedy this situation and, after reviewing a variety of options, chose to use Megamix II mortar from Xypex to patch and resurface the concrete structures.

Construction of the Nathpa Jhakri project began in 1993, and the final two 250-MW (340,000 hp) Francis turbineâ€generators went online in March 2004. It is owned by Satluj Jal Vidyut Nigam Ltd. (SJVN Ltd.) and cost US$2 billion to develop.

The headworks consist of the dam, power intake structures and four large underground desilting chambers. The Satluj River has a high concentration of silt. The tender specifications, based on observations for 20 years (from 1970 to 1990), specified an average silt concentration for the high inflow months of June, July and August as 932 parts per million after desiltation through desilting chambers.1 Water flows from the reservoir and through a 27.4-km-long headrace tunnel with a design discharge of 405 m3/s. The 21-m-diameter and 300-m-deep surge chamber is one of the deepest in the world. Three inclined pressure shafts feed the six Francis turbine-generator units in the underground powerhouse. The 980-m-long tailrace tunnel returns the turbine discharge to the river.

High silt content in the water is known to cause damage to generating equipment at hydropower facilities. In fact, in August 2012 HydroWorld.com reported that high silt levels forced the shutdown of Nathpa Jhakri, along with the 1,000-MW Karcham Wangtoo, 300-MW Chamera II and 231-MW Chamera III hydro plants in Himachal Pradesh. And in 2011, HRW-Hydro Review Worldwide published an article about work to reduce damage to the runners and related components from hydroabrasive erosion.2

Civil structures also can suffer. Through the combination of the high velocity of the water and its high silt content, there was significant erosion of the concrete spillway piers of the dam. Since 2009, civil contractors were performing repairs, primarily re- concreting damaged portions on the spillway basin and piers, on a yearly basis to restore the surface profile.

SJVN contracted Poyry Services to be the consultant on the concrete restoration work at Nathpa Jhakri Dam. Poyry’s scope of work included preparation and review of technical specifications, review of detailed designs and civil construction drawings, establishment of quality control procedures, assistance in solving technical problems during construction, settlement of claims, advice on construction methodology and equipment, and general project monitoring and management.

Working with Poyry, representatives of Xypex, which provides concrete waterproofing products, recommended the use of Xypex Megamix II – a thick repair mortar used to patch and resurface deteriorated concrete structures – because of its superior bond, low shrinkage, chemical durability and high strength. All of these claims were subjected to field trials spanning more than 12 months to evaluate actual performance.

Megamix II is a one-component mortar that can be sprayed or trowel-applied at a thickness of 3/8 in to 2 in (10 mm to 50 mm). This mortar is employed on a variety of civil structures that require protection against surface erosion, chemical attack and strength loss. Megamix II is enhanced with Xypex’s crystalline waterproofing and protection technology, which enhances the maintenance-free service life of civil structures.

The first step in repairing the spillway concrete at Nathpa Jhakri Dam involved preparation of the surface for application of the Megamix II by cleaning the concrete and repairing cracks.

Once this was complete, the Megamix – which was supplied in 55-lb bags – was mixed in portable concrete mixers on site. The mix requires 0.9 gallons (3.5 liters) of clean water per bag. Immediately prior to the application, the concrete substrate was saturated with clean water and allowed to come to a “saturated, surface dry” condition and maintained in this condition during the application process. Once applied to the concrete substrate, finishing was performed as quickly as possible using steel trowels.

SJVN received a five-year service warranty backed by a bank guarantee. The treatment is intact, barring some minor damage at the end of the piers resulting from impact by boulders, which has been repaired.

Based on this performance, SJVN plans to use the Megamix II to protect the piers at Nathpa Jhakri for the next five-year period. The utility does not own other dams facing a similar unique situation.

The total cost of the work was INR11,302,639 (US$173,790). The work was cost-effective in comparison to the generation loss due to the longer cycle for civil repair maintenance, which is now an every-five-years exercise rather than an annual one.