By Mike Stott and Graeme Leitch

SSE owns the 6-MW Allt-na-Lairige hydroelectric power station, which is on the Fyne River near Inverary in Scotland. This facility is more than 60 years old, and the powerhouse contains two Pelton turbine-generator units. The dam for this facility, at 425 m long and 24 m high, was the first large pre-stressed dam to be built in Western Europe.

Recently, a total overhaul of the Allt-na-Lairige station took place because of its age. During this refurbishment, the hydraulic control system was upgraded from the original low-pressure system to a modern high-pressure one. These tend to use 3,000-psi systems instead of the existing 1,000-psi system at the hydroelectric facility. Multi-orifice restrictors designed in-house were being used in the hydraulic actuators, which operate the water inlet valves, called spears. These are controlled by the governor to ensure suitable control of the water jets to the turbines for all load conditions of the generator.

The increase in system pressure was causing the actuators that control the water valves to move much faster than before. In addition, as the powerhouse building is neither heated in winter nor air conditioned in summer, the variation in temperature throughout the year (from -10 degrees Celsius to 30 C) was affecting the viscosity of the oil. For these reasons, maintenance engineers determined that the restrictors were not providing sufficient restriction, which resulted in sporadic operating times of the spears.

This is a problem because if flow is too slow, the turbines don’t speed up quickly enough to bring the generators on line. If flow is too fast, it can potentially cause damaging water hammer in the pipework and to the turbines.

There were concerns about making the orifices smaller than 0.9 mm diameter due to contamination. Thus, to compensate for this situation, SSE had to make adjustments to throttle the flow at the hydraulic power unit. This is not an ideal approach, and having the restrictors fixed would prevent anyone from inadvertently adjusting the throttles and causing damage. 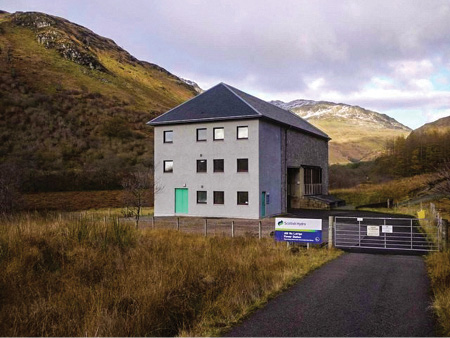 The 6-MW Allt-na-Lairige hydroelectric power station, on the Fyne River near Inverary in Scotland, recently underwent a complete overhaul.

The best option available to deal with this situation was to redesign the in-house restrictors to provide a higher restriction to slow the actuators down.

SSE chose standard catalogue multi-orifice restrictors provided by The Lee Company – from its 250 series axial visco jet range – because of the wide range of restrictors the company offers and their ready availability. Because the exact size of the restriction was unknown, SSE purchased a number of restrictors with a wide range of Lohm rates.

Visco jets contain many internal stages to provide a very small restriction to flow but still keep the internal passageway sizes large enough to resist blockage by contamination. Filter screens are fitted at each end of the visco jets to provide protection for the orifices. Another performance advantage of the visco jet is that by continually swirling the fluid to maintain turbulent flow, it compensates for the change in viscosity of the fluid due to any change in temperature.

This was an important factor at the Allt-na-Lairige station because the temperature of the hydraulic oil varies considerably during the year, such that the water valves were opening too slowly in winter with cold oil and too quickly in summer when the oil was hot.

A restrictor from the range purchased was selected to give the desired performance during summer conditions. The two restrictors were installed at the Allt-na-Lairige plant in March 2017. Evaluation is still ongoing to check the restrictor performance in cold weather, but the results received so far are encouraging.

Sticky Wickets is one of the most popular types of content we provide in Hydro Review. These articles focus on operational challenges and how they were solved. If you have solved a challenging operational issue and want us to consider it for a future Sticky Wicket, email elizabethi@pennwell.com.

Many Sticky Wickets articles are available on HydroWorld.com. Below are highlights of a few. You can find more by visiting www.hydroworld.com and entering “sticky wickets” in the search box at the top right of the page:

“Using Synthetic Ropes for Heavy Lifting” by Aidan Smith and Grant Campbell was featured in March 2018 and covered uses Contact Energy Ltd. has found for synethetic rope as a replacement for steel cable at its 464-MW Clyde Power Station in New Zealand.

“Finding the Best Fire Protection for Generators” by Robert Ballard and Steven Owens was featured in April 2017 and discussed how the Salt River Project has used a hybrid fire suppression system at its 36-MW Theodore Roosevelt, 193-MW Horse Mesa, and 60-MW Mormon Flat hydro projects in Arizona, U.S.

“Improving Draft Tube Flow with Epoxy” by Norm Klapper (and reviewed by Kurt F. von Fay) was featured in March 2017 and discussed the use of an epoxy coating to smooth the rough concrete surfaces in one of the draft tubes supplying water to the 6,809-MW Grand Coulee hydro project’s Powerhouse No. 3 in Washington, U.S.

“Reconfiguring Leads to Extend Stator Life” by Denis Bussieres, Pierre Fortin and Mario Dumouchel was featured in July 2016 and covered how Rio Tinto inverted the main and neutral connections in the stator of one of the generating units at its 450-MW Isle-Maligne powerhouse, in Canada, to extend the winding’s remaining life.