Seven prominent hydropower companies based in China are involved with more than 300 dams in 74 countries including Southeast Asia, Africa and Latin America.

According to International Rivers, since 2009 the non-governmental organization (NGO) has been engaged with these seven Chinese hydropower companies to monitor their global environmental footprint and this year completed a repot; Benchmarking the Policies and Practices of International Hydropower Companies — Stage 1: Environmental and Social Policies and Practices of Chinese Overseas Hydropower Companies.

The report consists of two sections: Part A Methodology and Analysis; and Part B: Benchmarking Finding Studies by Summary.

The following companies were part of the study:

After two years of analysis and field observations, International Rivers said its full analysis (policy and project assessments) was finalized in Feb. 2015 and shared with all companies for consultation, comment and correction.

The report was presented in Beijing at the World Hydro Conference in May and released publically in June.

In Part A, available here, the organization explained its methodology and ranked the companies it studied.

Section 3 of the document said, “The results presented below offer an analysis of industry trends and an overview of company performance. More detailed results outlining individual company performance and competition are provided here in Part B of this report.

“Table 3 presents the final rankings based on the policy dimension of the benchmarking project. The companies with the most experience in overseas hydropower construction — Sinohydro International and Gezhouba — ranked number one and two respectively.”

International Rivers said it utilized 23 key performance indicators (KPI) that fall across the three indicator categories: Environmental Management, Community and Labor Relations, and Risk Management. Some KPI are qualitative and others are quantitative.

“Both companies had sophisticated policies and internal regulations across a number of KPI, and the case studies revealed areas where project implementation exceeded company commitments. In contrast, Huadian and Huaneng struggled to do well in the area of Community and Labor Relations, and were ranked sixth and seventh respectively,” according to the report. 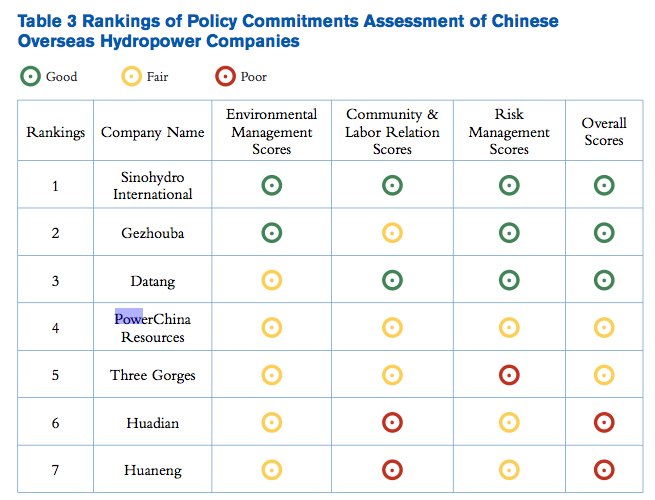 According to the report, Table 4 presents the final rankings based on the project performance dimension. In comparing the company policy and project rankings, it is worth noting that some companies did well across the policy dimension because they made blanket commitments to international standards, such as those established by the World Bank’s Safeguard Policies. However, based on our fieldwork, companies often failed to translate these commitments to the project level. For example, Datang and PowerChina Resources were ranked third and fourth in the policy assessment, but dropped to seventh and fifth place in the project assessment. 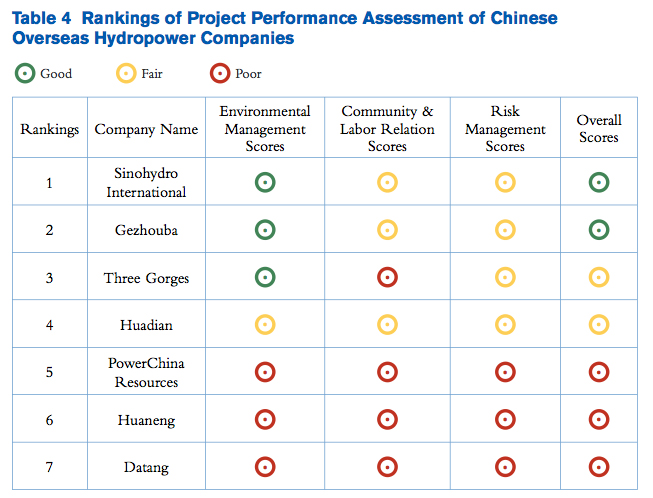 This also marks the first time that all seven hydro companies have worked with an NGO.

“Sinohydro International, Gezhouba and Huadian all officially invited us to visit their project sites and conduct interviews,” the report said. “We also had the opportunity to interview managers at PowerChina Resources’ Nam Ou project in Luang Prabang, and the project manager of Three Gorges’ Murum Hydropower Project in Malaysia.”