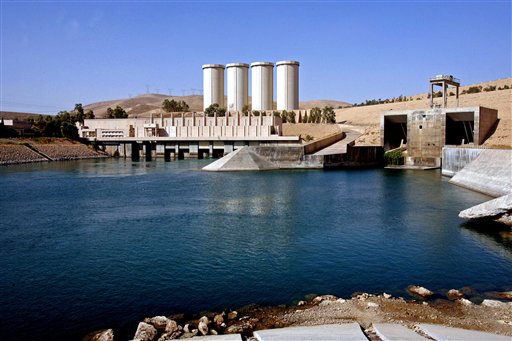 Reports from a number of global outlets say the Islamic State of Iraq and Syria (ISIS) has seized control of the 750-MW Mosul Dam, potentially threatening those downstream on the Tigris River.

ISIS attempted to gain control of Mosul Dam earlier this week, but the plan was thwarted by Iraqi Kurdish forces still inside the facility.

ISIS claimed via its website yesterday that it had seized the dam, which is reported to be confirmed by residents living in the area.

The fear now is that ISIS could use the dam for destructive purposes — a point further emphasized by the group’s recent comparison of itself to Noah’s flood from the Bible’s Book of Genesis.

According to a 2009 study published by two professors at Mosul University, more than 80 feet of flood water could cover 53.6% of Mosul City and destroy up to 100 square miles of farmland should the dam ever fail.

The flooding would then extend down the Tigris River toward Baghdad, potentially covering the capital city in as much as 15 feet of water within several days.

ISIS might not even have to intentionally damage the dam structure to cause a failure, experts said, noting that Mosul has been subject to continuous grouting programs since its completion.

Mosul was completed in 1984 on a soluble foundation of gypsum, anhydrite, and karstic limestone. To save construction time, foundation grouting was not completed ahead of time. It began seeping immediately upon filling of the reservoir in 1985.

“This has created a cyclical problem because the seeping of reservoir water into the soluble foundation causes the foundation material to dissolve, which leads to larger open spaces, which in turn leads to larger quantities of water seeping into the foundation and then more dissolution,” Richard Coffman, assistant professor of civil engineering at University of Arkansas, said.

Coffman conducted extensive studies of the dam, using satellite-based radar images taken from March 2003-April 2007. He determined the structure is subsiding at a rate of 8 millimeters per year.

“Simply put, if ISIS does not continue grouting operations, the dam may fail,” Coffman said during the time in which the dam takeover was believed to have been successful. “If failure occurs, Mosul will be inundated with approximately 30 meters of water and Baghdad with 5 meters of water.”

The Corps concluded in 2006 that “in terms of internal erosion potential of the foundation, Mosul Dam is the most dangerous dam in the world… If a small problem at Mosul Dam occurs, failure is likely.” A truck packed with explosives blew up near the dam in 2007, partly destroying the main access bridge and killing a policeman.