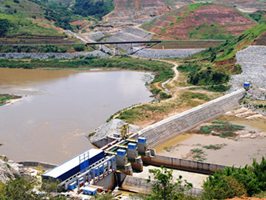 It won’t be long until Brazil’s 334-MW Simplicio complex begins producing energy as the hydropower project’s reservoir is now under way, according to state-run power company Eletrobras Furnas.

The US$1.3 billion project — located on the Paraiba do Sul River on the border of Rio de Janeiro and Minas Gerais — should be generating power from its first turbine in mid-April.

“Simplicio is one of the most challenging works of Brazilian engineering and very strategic for its proximity to centers of consumption,” Eletrobras Furnas President Flavio Decat said.

Eletrobras (NYSE: EBR) said Simplicio was a unique project given a 30-mile long system of canals, tunnels, dams and reservoirs designed to help prevent flooding a large area of urban and arable land. This “hydraulic circuit” reduced the project’s impact to 0.05 square kilometers flooded per MW generated, which, according the company, is one of the smallest reservoir to output ratios in the world.

“When the plant begins operating, Brazilian society will be the winner,” Decat said. “It will serve a population that is becoming increasingly more robust.”

Filling of the reservoir is expected to be finished by the end of March.