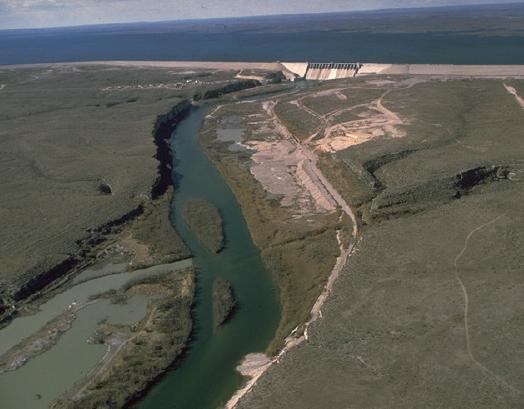 Amistad Dam Road at the 132-MW Amistad hydroelectric project at the U.S. Port of Entry near Del Rio, Texas, will re-open Oct. 5 after being closed since Feb. 26. Heavy equipment blocked Amistad Dam Road during geological drilling and testing at the dam, and a crane accident in April that killed two workers extended the road’s closing.

Amistad Dam is an international dam across the Rio Grande at Del Rio, Texas-Ciudad Acuna, Coahuila. Built in 1969, it is an earthfill dam 254 feet in height by 32,022 feet in length, which contains a concrete section and two very long embankment sections. The dam was constructed on a karstic foundation of soluble limestone and marl.

According to engineers from the U.S. Section of the International Boundary and Water Commission, United States and Mexico (USIBWC), the organization that operates and maintains Amistad Dam, “Since construction, extensive seepage has been measured downstream and sinkholes have been discovered and treated in the reservoir area.

“Although the embankment sections have performed satisfactorily in the operational history of the dam: the karstic foundation conditions, high seepage flows and sinkhole formation pose a real concern for the potential of ongoing or future internal erosion of the embankment and foundation.”

In addition to testing the dam’s earthen embankment, since the crane accident, inspecting the dam for any damage was essential to assure and address any safety concerns to the public, according to the USIWBC U.S. Section.

Industrial Equipment Mechanics Ruben Solorio and Michael James, who both were USIBWC employees, died in a work-related accident at the dam on April 29.

The accident occurred as workers were pressure-washing gate No. 2 on the downstream side of the dam. Published reports indicate a crane at the top of the dam was lowering the two workers in a basket when the crane tipped, causing the basket to fall into the water. Divers from the U.S. Border Patrol recovered the bodies of the two men on April 30.

USIBWC is responsible for applying the boundary and water treaties between the U.S. and Mexico.