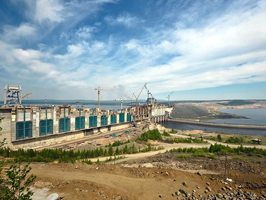 HydroWorld.com reported in September 2011 that each of Boguchanskaya’s nine 333 MW hydro turbines was manufactured by Power Machines at a cost of US$117.3 million.

RusHydro said the first three units began commercial operation Dec. 1, 2012, and that the complex had produced a total of 8.6 million kWh through the first week of January 2013.

The project is being developed in partnership with Russian aluminum company Rusal as part of the Boguchanskoye Energy and Metals Complex.

The project is located on the Angara River in the northern part of Russia’s Krasnoyarsk Region.