Rangit River, a major tributary of River Teesta, in the Eastern Himalaya supplies the 60 MW Rangit Hydro Power Station which was commissioned in February 2000 by NHPC. However, the river transports a large quantity of silt with its water during the monsoon months of May to September and during an incident in 2006 the project’s powerhouse was flooded.

At around midnight on July 11, 2006, the Rangit River brought a flood of 1405 cumec peak with sediment concentration of 51.5 kg/cumec (kilogram/cubic meter/second) to the powerhouse and the three machines which were generating at full power. Sediment, along with trash, entered in different parts and components of the turbines, cooling water system, valves, etc choking them all.

Having stopped generation, the cleaning operation was started but two days later on the 13th while cleaning a valve, water flow suddenly started through it. The jammed valve could not be closed and the powerhouse was subsequently flooded up to the service bay level. The powerhouse could be brought back to operation only by the middle of October and heavy losses were incurred in power generation as well as damage to the turbines and generators. 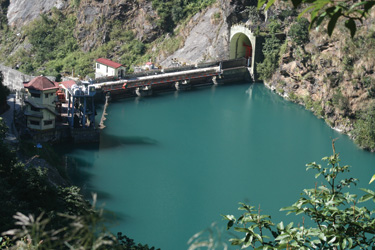 To reduce the probability of such catastrophe in the future, the operation procedure of spillway gates and dam was reviewed. A distinct change of operation procedure of the intake gates and spillways was made. This led to dramatic improvement in performance and operation of the powerhouse though reduced the peak power generation capacity to some extent. However, annual damage to the ogee spillway and downstream stilling basin could not be mitigated fully as the concentration and characteristics of sediment flow over the spillway could not be reduced.

The Rangit Hydropower Station was built by NHPC Ltd on the Rangit River, a major right bank tributary of the Teesta River in the Eastern Himalaya in Sikkim. The river arises from the Talung glacier and it meets the Teesta river at Melli after travelling 61 kilometers from its source. At the dam site, the catchment area drained is 979 square kilometers. Rain-fed catchment is 712 square kilometers and the balance area is snow fed above a snow line contour of 4,570 meters. Elevation of the catchment varies from about 600 meters to about 7,338 meters. Around 360 metres upstream of the dam, the Rangit meets another river, the Rothangchu. Both the Rangit and Rothangchu rivers carry large quantities of sediment, mainly during monsoon months. The Rangit dam is a concrete gravity dam of 50 metres high over its deepest foundation. It has three spillways with gates. The width of each spillway bay is 9 metres, and total width of the spillway opening is 39 metres. The spillway is designed for a flood of 2725 cumec (cubic meter/second) at full reservoir level (FRL). The dam has a gross storage of 1.06 million cum (cubic meter). The live storage as per a 2006 post monsoon reservoir survey is 0.983 million cum. The reservoir is small but has two limbs of about 1 km length each extended to both the Rangit and Rothangchu. The intake structure for the power tunnel is located in the left bank of the dam and river. The head race tunnel (HRT) is 3 km long and carries a design discharge of 56 cumec. At the end of the tunnel and the surface penstock, the surface powerhouse is located at the bank of the River Rangit. With three units of 20 MW each, the total generating capacity of the project is 60 MW. The project was commissioned in December 1999/ February 2000.

Between 70 to 80% of the total flow takes place during the monsoon months, i.e. June to September. If the pre-monsoon month of May is added, the flow percentage would reach as high as 85%. Average annual sediment load as estimated during project design is 2.69 million tons. However, the observed sediment load since 2006-07 is much more, ranging between 3.8 million tons to 17.28 million tons.

It appears that, while during the monsoon months 70% to 80% of river discharge flows through the river, it carries with it 90% to 98% of sediment load during this period. This makes the operation of dam and powerhouse a difficult job.

It is apparent that there is no correlation between annual sediment and annual discharge, which makes the sediment flow prediction or forecasting during monsoon practically impossible. However, though such high sediment load was not estimated during design stage of the project, the intake structure was provided with two intake gates at different levels.

River Rangit is almost across from the intake and carries the larger share of sediment brought by the two rivers to the dam. Moderation of concentration of variation of sediment in the reservoir does not take place due to the short distance between the intake and the confluence of the rivers as well as the short length and small depth of the reservoir, whose dead storage space is almost filled by sediment deposits.

Furthermore, the spillway also was bearing the brunt of such sediment flow in each monsoon period. Petrography analysis of sediment indicated that about 65% of sediment has quartz as its main component. This flow of sediment was inflicting significant damages on turbine parts such as runners, guide vanes, labyrinth, bottom seals and other underwater components and clogging the cooling water pipes and system. Sediment was also causing large scale damages to the ogee and glacis of the spillway and the stilling basin.

On 11 July 2006 the high discharge flood with its very high sediment concentration came suddenly and meant that the lower intake gate could not be closed immediately. Flood water along with wooden logs, silt and debris which could pass through the trashrack entered the head race tunnel. It choked both the desilting basins. A high content of sediment and mud also reached the powerhouse through the tunnel. As a result, all the hydro components of the powerhouse got choked and pressure in main inlet valve (MIV) started falling.

With the choking of the cooling water system, all three generating units were shut down at 1.30 AM. It is understood that the reason for such high sediment flow with high debris and logs was due to the bursting of a natural dam formed about 16 km upstream.

On July 13 a jammed open strainer isolating valve saw the water level start to rise. Within four hours, the powerhouse up to the service bay level was submerged. Consequently, a number of components got submerged including the drainage/dewatering pump and their control panel, main inlet valve, turbine, stator, rotor, and the excitation panel of all units, among others.

The complete powerhouse was dewatered and cleaned of silt by August 13. Action for restoration of the powerhouse was taken up with involvement of BHEL, the manufacturer of machines and ancilliary components. Restoration activity included, for example, cleaning of the stator, rotor and generating parts including air blowing, cleaning/flushing out of water lines, stator coolers and bearing coolers and pressure testing. For the turbines, work included restoration of govornors and replacement of shaft seals.

Due to this disaster, NHPC lost about US$7 million in power generation and about US$1 million in restoration and damage repair works.

It was understood that due to a number of limitations, the Rangit Power station is vulnerable to high sediment flow in the river and also in the head race tunnel through the two-tier intake. Significant factors include the small reservoir capacity and that both the rivers Rangit and Rothangchu transport high sediment loads during the monsoon season and sometimes with unusually high concentrations. Furthermore, the lower intake being close to the spillway level, i.e., almost the sedimented reservoir bed level, sediment in high proportion can enter into the intake easily as a proportionately large flow will be drawn through the lower intake. The high concentration of sediment chokes the desilting basin, cooling water system and damages the underwater parts, affecting the running of the powerhouse, sometimes with catastrophic effects.

Many alternative solutions to this problem were explored, including a proposal to close down the low level intake during monsoon months. Hydraulics of the intake were examined. The full reservoir level is at 639 m and upper intake crest is at 632.50 m. It was found that drawing the full design discharge through the upper intake will increase headloss through the intake by 0.2 to 0.3 m and this can be compensated for by increasing the full reservoir level by about 0.12/0.15 m and also increasing the discharge by a small percentage of the design discharge. Flow was otherwise found to be smooth.

The designer conceived two levels of intakes while adopting the following operational rules for the intake and spillway gates:

1. During monsoon or high flow periods all three spillway gates are to be opened equally so that no uneven distribution of water and sediment takes place in the dam and, more importantly, in the stilling basin.

2. During the months from May 1 to September 30, the lower intake gate should be kept closed irrespective of sediment load travelling through the river.

During July, flushing is to be carried out when river discharge crosses 400 cumec and if June discharges do not cross this mark, then one flushing should be carried out in July irrespective of discharge.

4. After September 30 the lower intake gate may be opened but after October 31 should be kept open so that peak power can be generated. During the monsoon when the intake is drawing the design discharge or more than 75% of the design discharge, both the lower and upper intake gates shall be kept fully open for smooth flow with minimum head loss. This is to be done until sediment concentration in the flow is less than 5 kg/cumec.

5. As the sediment concentration in the flow reaches 5 kg/cumec and more, the lower gate of the intake is to be closed. This would lead to some additional head loss.

In 2007-08 repair work for the underwater parts, which was left over from the previous year, was undertaken and completed. Hence the capacity index during the year remained almost the same as the pre-disaster year. But from 2008-09 onwards, the performance of Rangit has seen a dramatic improvement in machine availability.

Regarding damage to the spillway and stilling basin, this continued but at a much reduced scale due to the use of high performance concrete with micro-silica. Minor repairs were required in the post 2010 monsoon and post 2012 monsoons.

Further research on high-performance concrete for developing erosion- and cavitation-resistant concrete surface is very much required.

Rangit Dam and its powerhouse has abundant water flow and also sediment discharge. The project appears to be under designed as far as capacity of the generation is concerned.

However, it is a difficult power station to operate in view of very high sediment flow during the monsoon with capacity of the reservoir being small. In July 2006, a catstrophic flood with large sediment concentration caused havoc to the power station and dam. Determined efforts by the team of engineers and tecninians could bring back the powerhouse in the normal generation mode, but a large revenue loss was incurred.

In this circumsance, an alternative solution for the safe operation of the dam and powerhouse was explored. A far from ideal alternative, based on an advanced forcasting system for operations at the dam, was rejected as a solution due to many limitations.

Subsequently, a review of the operating procedure of the dam and powerhouse was performed and new guidelines were implemented under the existing conditions of operation based on dam site data observation. This resulted in substantive improvement of the overall performance. The new guidelines are also expected to take care of evantualities such as the July 2006 flood.

However, erosion and cavitation damage to the spillways is an issue for which some progress has been made by use of high-performance concrete with micro-silica and further on-site research is very much required.

This article is an extract based on a presentation by Siba Prasad Sen, a hydropower consulatant and former Director Technical, NHPC Ltd.