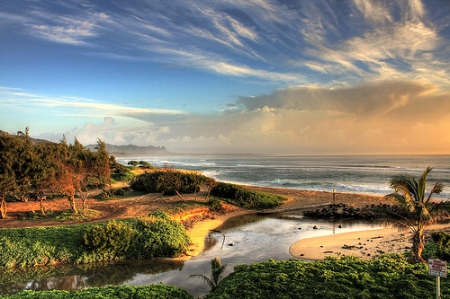 Hawaiian legislators have passed a bill that could allow for the development of micro hydroelectric projects on the state’s agricultural land should Gov. David Ige sign off on the new law.

The legislation, Hawaii House Bill 1273, would allow for the construction of hydropower projects up to 500 kW in capacity if built as an “accessory to agricultural activities on agricultural land for agricultural use only.”

Hawaii‘s law already allows for a number of other renewable generation projects to be built on agricultural land, but hydro is not currently included.

“The legislature finds that the development of hydroelectric energy-generating facilities in Hawaii is vital to the energy security and energy independence of the state,” H.B. 1273 says. “Increase use of renewable energy resources will achieve broad societal benefits, including resistance to oil price increases, environmental sustainability, economic development and job creation.”

The bill notes that the state’s agricultural land is a “fundamentally important and diminishing resource” and that as such, “the location, construction and operation of renewable energy facilities must be considered in a manner that promotes both food and energy security.”

HydroWorld.com reported in May that Hawaii’s legislators are pursuing a bill that would require the state to generate 100% of its power from renewable sources by 2045.