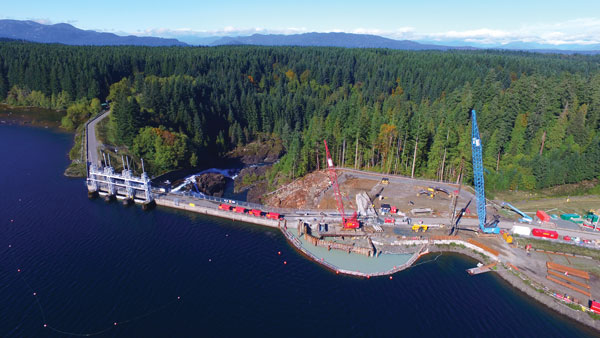 SNC-Lavalin has received the Award of Excellence (Energy & Industry) from the Association of Consulting Engineering Companies British Columbia (ACEC-BC) for its work on BC Hydro’s John Hart Generating Station Replacement Project.

BC Hydro said the replacement project was initiated because the plant, built in 1947, was “aging and needs to be replaced”.

The new station has a capacity of 138 MW and was operationally commissioned in November 2018.

SNC-Lavalin says successes and achievements throughout the project include building the new powerhouse underground to minimize the environmental footprint and offer higher safety in case of a seismic event. The removal of the existing generating facility — including the three penstocks, powerhouse and two of the three surge towers — will further reduce that footprint and have the site better fit in to the adjacent Elk Falls Provincial Park. More than 3.5 million person hours were worked without a lost time accident.

“We appreciate the support and forward thinking afforded by BC Hydro in recognizing our innovative design to move the new powerhouse underground, as well as their high regards and expectations on environmental protection,” said Travis Smith, senior vice president, global projects, SNC-Lavalin.

This is not the first award this project has won. The Canadian Hydropower Association (now WaterPower Canada) gave the Outstanding Project award to SNC-Lavalin and BC Hydro.

SNC-Lavalin is just one industry-influencing company exhibiting at HydroVision International 2019 in Portland, Oregon, in the U.S. Click here to see a full list of exhibitors.