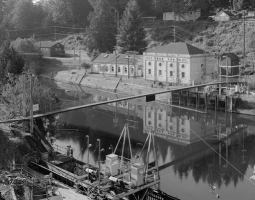 The Snoqualmie Falls Hydroelectric Redevelopment Project was selected by the U.S. Society on Dams (USSD) as its Excellence in the Constructed Project award recipient for 2014. The award was presented at the USSD Annual meeting in San Francisco earlier this month.

This is USSD’s top award for completed work, established to recognize those who “meet the challenges of the nation’s aging infrastructure in an era of limited financial resources and increasing environmental awareness,” according to the organization’s award description. USSD honored contractor Bozeman-based Barnard Construction Company, Inc., owner Puget Sound Energy, Inc. (PSE), and design engineer Klohn Crippen Berger with the award.

Originally built in 1898, Plant 1 at the Snoqualmie Falls Hydroelectric facility was the world’s first completely underground powerhouse, constructed in a cavern 270 feet below Snoqualmie Falls. Plant 2, located 1â„4 mile downstream from Plant 1, was built in 1910 and expanded in 1957. PSE sought to redevelop the facility for relicensing and long-term use. The site was unique: work took place in- water, on water, below ground, directly upstream and downstream of a 30-story waterfall, down a 60- percent grade slope, directly beneath a luxury hotel focused on its outdoor setting, interspersed with public access for roughly 2 million visitors per year, and requiring historic preservation in many areas.

With the completion of this project, the Snoqualmie Falls generating facility’s capacity has been increased from 44 MW previously to 54 MW today. This increase is being achieved through greater plant efficiencies and notably without diverting any additional water from the river to feed the seven turbines.