The Unit 1 upper guide and thrust bearings at 125 MW Tungatinah experienced intermittent high vibration after an upgrade and modernization. The author developed a novel integrated vibration analysis approach to find the root cause and propose a solution.

The 125 MW Tungatinah Hydro Power Station in central Tasmania has five vertical shaft generating sets commissioned from 1953 to 1956, each comprising a 26.1 MW Francis turbine and a 31.25 MVA synchronous generator. From 2010 to 2014, Units 5, 1 and 2 – in that order – underwent upgrade and modernization.

Unit 1 was returned to service (RTS) in January 2013 and almost immediately experienced unpredictable, intermittent and unacceptably high vibration. A condition monitoring system is installed on this unit, and a portable vibration system was used for commissioning. The increase was recorded at all three bearings but was particularly noticeable at the upper guide and thrust bearing assembly (see Figure 1 on page 20).1 Maximum shaft orbits increased for all three bearings and upper guide bearing housing vibration reached 3.8 mm/s (unacceptably high).

Five days later, a significant increase in bearing orbits and housing vibration was recorded. The vibration trends captured show significant variation in amplitude for each machine start despite operating at consistent loads.

This article proposes a systematic, analytical approach to resolving vibration problems. Basic elements of the approach are:

Ask: “Why did this turbine fail and not the nearly identical turbine next to it?”3

Idea: Compare the failure case and a case as similar as possible that did not fail.

The Unit 5 concrete beams at the generator level were cut to allow for spiral casing assembly and replaced with a heavy steel welded structure that restored the foundation stiffness.

Vibration analyses should include a review of the following:

Machining tolerances: Standard IEEE 810 to be applied for the shaft.3

Vibrations: According to some hydro industry experience and proven practice, ISO 7919-5 and ISO 10816-5 are not sufficiently defined as vibration standards.

The turbine generator shaft rotating system natural frequency of lateral vibrations varies with bearing stiffness and can be significantly less than calculated if this stiffness is insufficient.

Hydro Tasmania technical personnel conducted root cause analyses from April to June 2013 to help identify the cause of the unusual machine condition. Tests of changing conditions, loads and sequences on Unit 1 and the other machines in service were performed. Results showed the vibration was not speed (mechanical balance) related but that increased vibrations of the stator frame and stator core when excitation (electrical force) was applied were evident.

Comprehensive inspection and partial strip down of Unit 1 was performed, and a thorough investigation of the surrounding structure. 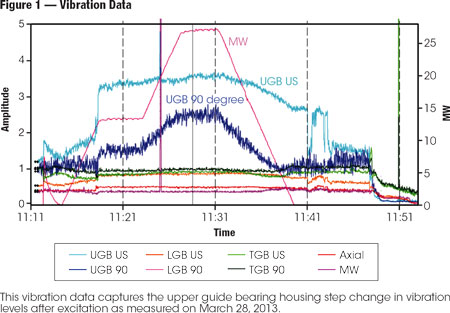 Evidence was seen of a resonant frequency at the upper guide bearing around 608 rpm, very close to the operating frequency of 600 rpm. With a resonant frequency so close to the synchronous speed, the sudden step changes in vibration may be explained by only a small perturbation to the machine causing the resonance to be excited. Likewise, a similar perturbation could de-excite the resonance and cause a step down in vibration.

Figure 1 shows that once the unit is steady at 0 MW, it oscillates between a resonant and non-resonant condition, evident by the dramatic variation in vibration levels at the upper guide bearing.

During work on Unit 1, sections of flooring concrete were removed to install a new spiral casing down to the turbine floor. Enlargement of the existing openings included removing a concrete floor beam and slab in the operating and generator floor. ‘As left’ alignment was good, with a shaft plumb of 0.005 mm/m and the runner centralized in the wearing rings. However, ‘as found’ shaft plumb was 0.029 mm/m (acceptance <0.020 mm/m) and the runner was about 0.500 mm offset in the seals.

To understand the relationship between vibration and foundation stiffness, tests were conducted using seismic accelerometers from PCB Piezotronics installed at the generator level on all five machines.6 Vibration analysis revealed the power station structure is susceptible to vibrations produced particularly by Unit 4. With Unit 1 shut down, vibration up to 0.4 mm/s was recorded outside the Unit 1 alternator enclosure (see Figure 2 on page 22). 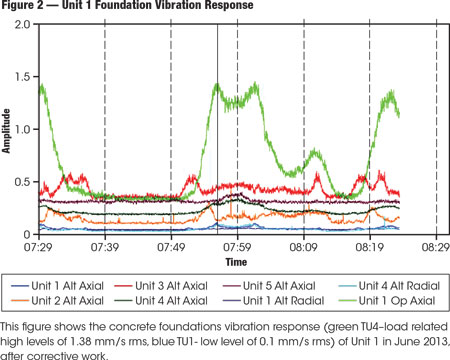 High sensitivity accelerometers from PCB Piezotronics were installed outside the Unit 1 stator. Further analysis conducted during RTS testing revealed that as Unit 4 load fluctuates above 24 MW, it would occasionally initiate structural vibration up to 1.4 mm/s in the station floors. Similarly, high vibration was observed in the Unit 1 exciter housing. The low stiffness of the exciter housing combined with its shape as a cantilever beam extending from the operating floor caused it to vibrate up to 12 mm/s rms on occasion as the foundation structural vibration initiated from Unit 4 “tuned in” to the exciter housing at 36 Hz.

The stator is assembled in two halves. The key bars are welded into cut-outs in the frame and shimmed dovetail strips are bolted to the inner surface of the bars for stacking of the lamination plates. The stator frame/core consists of 32 key bars welded to the frame diametrically around the inner bore. A dovetail key is spaced from the key bars using small sections of plate and fastened by 11 countersunk 0.5-inch screws.

Based on stator core and frame vibrations increasing when excitation is applied, it appeared Unit 1 was experiencing a loss of core to frame connection. Specifically, the loss of the dovetail to keybar connection was identified as the likely possible root cause due to inherent flaws in the dovetail design arrangement using screws.1,7

The Unit 1 stator frame was shimmed using 10 mm-thick plates to correct axial alignment of the rotor and stator, which was found to be incorrect during the upgrade and modernization alignment. This contributed to a decrease in stiffness of the stator supporting assembly.

Other minor abnormalities discovered and tests performed during the investigation are:

Combining the vibration definition (dynamic force/stiffness) with results of the detailed analysis and inspections, the following was discussed to identify the root cause of the Unit 1 high intermittent vibration and provide a corrective action plan.

It was decided to: increase the stiffness of the upper guide bearing and shift the resonant frequency away from the operating frequency by re-installing the floor beams and adding stiffening beams, realign the unit to the “settled” position of the turbine components and perform a trim balance of the rotor.

Work was carried out to increase overall stiffness of the unit foundation and at the upper guide bearing support and to reduce the dynamic forces: alignment and rotor unbalance to control response of the unit during operation, by shifting the resonant frequency from rated speed and reducing the subsequent vibrations.

Stiffening metal beams: The concrete floor beams were replaced with steel I-beams. To provide additional stiffness to the upper guide bearing assembly, eight more steel beams were installed at each upper guide bearing bracket leg extending outwards to the alternator enclosure wall attached to the reinforced top concrete beam. The new beams were mounted with only light contact to allow for thermal expansion once the unit is online.

Alignment: The unit was realigned to the settled turbine components and with the runner centralized to the wearing rings. The upper guide bearing was offset to achieve a shaft plumb of 0.011 mm/m. Besides shifting the resonant frequency of the upper guide bearing by improving the stiffness, the improved alignment will help minimize the machine perturbation exciting the resonant frequency.

Balancing: During RTS testing of Unit 1, the balance grade of G1.0 achieved during initial commissioning was again recorded. Further minimizing the unit perturbation, the rotor was successfully trim balanced to a grade of G0.8 according to ISO 1940.12

Exciter shaft: The new exciter shaft installed during the upgrade and modernization was out of balance. The shaft was removed and dynamically balanced in April to June 2013.

Unit 4 restriction: Structural vibration originating from Unit 4 operating above 24 MW was recorded to similar levels during the Unit 1 RTS. To prevent long term damage to the concrete foundation and further minimize any disturbance exciting the resonance on Unit 1, a 23 MW load restriction was placed on Unit 4.

Overall, the shaft orbits and bearing housing vibration were much lower than during commissioning in January to February 2013 and dramatically lower than the previous high vibration recorded in March 2013. 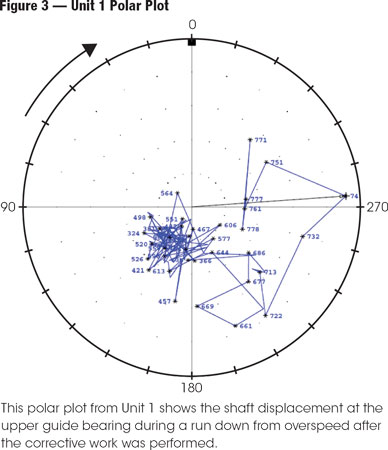 Since the Unit 1 RTS, vibration levels have remained well below the previous levels and the unit has continued unrestricted operation.

Following completion of the Unit 2 upgrade and modernization project and installation of new metal support beams, which increased the overall stiffness of the foundation at adjacent Unit 2, vibration levels at Unit 1 unit have been stabilized and reduced.

Experience on this project highlights the importance of the following recommendations:

Technical specifications shall include all the factors above and vibration levels determined in conjunction with machining tolerances, runner workshop balance specified as eccentricity (not residual weight), site shaft alignment tolerances, rotor site balancing, sufficient stiffness of the support and concrete foundation to keep the shaft critical speed 15% above overspeed and vibration levels within acceptance.

Install and monitor vibration equipment on each unit. Vibration information is crucial to timely identification and diagnosis of machine problems. Use vibration software – such as that from Veski – that can produce such data as shaft orbits, shaft deflection, slow roll vector, guide bearing alignment, air gap, calculation of shaft critical speed and stiffness of the supporting structure.

When conducting major work on a unit, consider its impact on unit stiffness, which directly affects vibration.

During the rebuild of a unit, ensure the alignment is within the design specification, and allow time for unit balancing during RTS.

Due to the complexity of vibrations of vertical-shaft units, it is important to periodically present advances in analytical and diagnostic tools and methods and standards and any new knowledge and experience (Unit 1 is a good example), as well as to review prior knowledge and concepts.

5. Nasselgvist, M., R. Gustavsson, and J.-O. Aidanpaa, “A Methodology for Protective Monitoring of Hydropower Units Based on the Mechanical Properties,” ASME Journal of Dynamic Measurements, March 2011.

9. Instructions on Measuring and Interpreting the Vibrations on Machines, VDI 3839.