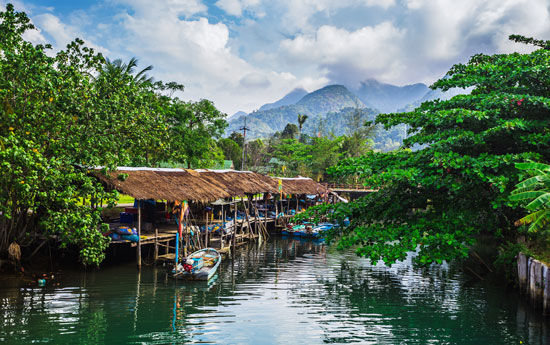 Southeast Asia is home to some large hydropower projects currently under development, but it is also making progress on small hydro. A number of countries in the region have singled out small hydro as a route to accelerating clean energy development and they represent considerable potential.

By Michael Harris and Elizabeth Ingram

UNIDO and ICSHP released a report called World Small Hydropower Development Report 2013: South-Eastern Asia. According to this report, the renewable generating mix relies almost exclusively on hydro (12%) and geothermal (3% total generation). The report indicates hydro development in the region can help the Association of Southeast Asian Nations achieve its target of 15% of renewable energy in the total power supply by 2020.

The country with the largest hydropower capacity is Vietnam with 5,500 MW, followed by Indonesia with 4,519 MW and Thailand with 3,424 MW. The classification of small hydropower in this region varies by country, with a ceiling of 30 MW in Vietnam, 15 MW in Laos and Thailand and 10 MW in some of the others. The report indicates Vietnam has the most installed small hydro capacity at 622 MW, followed by Philippines at 248 MW and Thailand at 146 MW. Vietnam has the largest potential at 2,205 MW, followed by Philippines at 1,876 MW and Indonesia at 1,267 MW.

Recent small hydro activity in this region is largely led by four countries:

Philippines
The Philippines has a specific focus on small hydro development. It has 248 MW of installed small hydro capacity but a development potential of 1,876 MW, according to the report.

In late March, the National Irrigation Administration said it plans to build 150 to 200 micro hydropower plants, with a goal of increasing the country’s hydro generating capacity by a cumulative 50 MW.

The plan is intended primarily to benefit isolated farming communities and will focus on installing hydropower components on existing small-head irrigation canals.

The projects will be bid in groups of three to five, according to an NIA official interviewed by Asian news sources, with each project costing at least US$1.346 million. The bidding process was supposed to take place in May, allowing construction to start later in 2015. NIA said the size of the proposed projects will make it possible to complete many of them within six months.

In addition, at the very beginning of 2015, the Filipino Department of Energy (DOE) announced that it had awarded pre-development and development contracts to nine organizations for 22 new hydroelectric projects on Mindano Island.

Published reports indicate the projects, in the Davao Region, have a combined potential capacity of 256.35 MW. Nine different organizations own the projects and they include private companies, local government units and electric cooperatives. 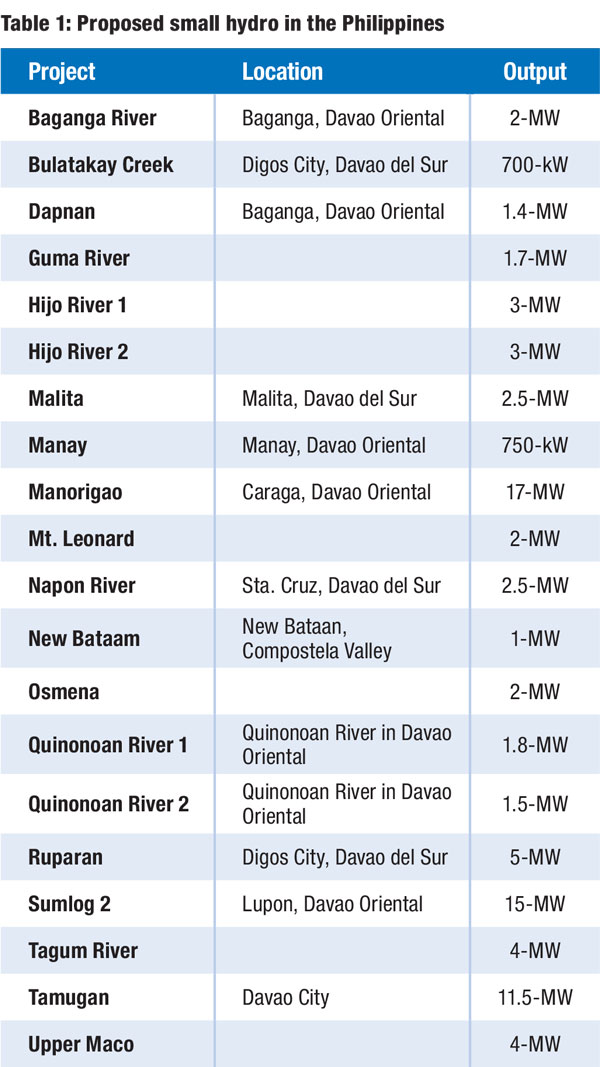 Davao Light & Power Co. and Dasureco also received a boost in power supply in May 2014 with the commissioning of two plants, the 6.6-MW Tudaya 1 and 7-MW Tudaya 2 hydropower plants at Barangay Sibulan and Barangay Astorga in Sta. Cruz, Davao del Sur. Tudaya 1 harnesses the Baroring River, while Tudaya 2 utilizes the Sibulan River. Combined, the projects represent a total investment of almost US$53.4 million.

Other small hydro projects have advanced in Vietnam recently, http://www.hydroworld.com/articles/2014/08/vietnam-utility-seeks-bids-to-equip-2-8-mw-so-vin-hydro-project.html including solicitations in 2014 to equip the 2.8 MW-Son Vin project and the http://www.hydroworld.com/articles/2014/06/vietnam-utilities-seek-bids-to-equip-7-5-mw-nam-nghe-7-5-mw-dak-pring-hydro-projects.html 7.5-MW Nam Nghe and 7.5-MW Dak Pring projects.

Nam Mo & Nam Non Hydropower plans to hire a company to supply, install, test and commission two 8.5-MW bulb turbine-generators, auxiliary mechanical equipment and electrical and control equipment as well as construction and completion of facilities of Ban Ang. The work is expected to require 690 days to complete.

At the same time, there have been problems. In late 2014, tunnel building at a 23-MW plant being constructed on the Da Dang River in the province of Lam Dong, Vietnam, was suspended pending investigation into the confirmed cause of a tunnel collapse at the site on Dec. 16.

The mishap at the US$22.4 million http://www.hydroworld.com/articles/2014/12/tunnel-collapses-at-us-22-4-million-da-dang-da-chromo-hydroelectric-project.html Da Dang-Da Chomo plant trapped 12 workers for three days, according to local news sources. All of the workers were rescued Dec. 19 from a 20-meter-long section of the tunnel, designed to be 700-meters-long, which collapsed, as the passageway was nearly complete.

There were no reports of serious injury or http://www.hydroworld.com/articles/2014/12/12-workers-rescued-at-vietnam-s-da-dan-da-chomo-hydropower-plant.html deaths from the accident.

About 600 meters of the tunnel was completed before the collapse, which occurred about 500 meters from the opening of the structure.

Vo Nhat Thang is chairman of Long Hoi Hydropower Joint Stock Co., a company that is a major investor for the project. Thang reportedly said, “During construction, ground subsidence occurred and caused soil and sand to be swept by underground water into the tunnel while [underground construction] failed to tackle the problem.”

According to published reports, the plant has been being built http://www.hydroworld.com/articles/2007/10/update—alstom-hydro-to-equip-vietnams-2400-mw-son-la.html for more than 10 years. During that time, conditions have changed in building code requirements, contractors and geological conditions at the site.

Based on the examination of the accident scene, it is certain that the tunnel had suffered from structural problems before it collapsed, said Le Quang Hung, deputy Minister of Construction. “The collapse could have been caused by complicated geographical conditions, poor design, or unqualified construction,” Hung said.

No timetable is available for construction at the site to resume, but Da Dong-Da Chromo is expected to provide 109.27 GWh per year when it begins generating electricity.

The contract, which is KGAL’s largest to date, was offered by the state’s investment arm, Warisan Harta Sabah Sdn. Bhd. (WHSSB), and is expected to last around nine years.

WHSSB, alongside Sabah’s economic planning unit and power developer Nova Beta Energy, have identified a number of potential run-of-river sites for projects with less than 30 MW of capacity. Studies will be carried out on 17 of the sites, possibly adding more than 430 MW to Malaysia’s grid.

“The benefits of developing this project are numerous,” KGAL said. “It will not only provide a reliable electricity supply to a region with an existing shortfall, but it will also increase local jobs and tourism in the area, improve the region’s infrastructure, as well as education, health, agriculture, forestry and fisheries — not to mention fueling the local economy by providing an income from exporting the power.”

The project is intended to support the State of Sabah Government’s (SSG) target of achieving “developed” status by 2020. The groups said development of the projects would be in accordance with the International Hydropower Association’s http://www.hydroworld.com/articles/2014/09/world-bank-calls-for-greater-use-of-hydropower-sustainability-assessment-protocol.html Hydropower Sustainability Protocol.

“It is not every day that you have the chance to develop a complete hydro capability and, in doing so, improve people’s lives,” KGAL managing director Ken Grubb said. “Throughout negotiations, we have been impressed with the determination of the client organizations to find way of delivering sustainable solutions that are in the best interests of the people of Sabah, their heritage and their environment.”

Development of all the sites would cost more than $845.2 million.

Laos
While it is one of the poorest nations in Southeast Asia, Laos is among the richest in terms of natural resources. As such, the World Bank’s International Finance Corporation has been active in recent years helping the country formulate environmental and social programs related to its hydro sector, which has seen an increase in activity since 2000 with about 20 plants developed and up to 50 more expected to be operational by 2025.

IFC announced the creation of a Hydropower Developers Working Group in Laos in April 2013 with the goal of providing specialized training and a forum for exchanging knowledge.

Financing from IFC was then used by Laos’ Institute of Renewable Energy Promotion (IREP) — a unit of the Ministry of Energy and Mines — later that year to seek investor-operators to build and operate micro-hydro systems through public-private partnerships in areas where the national grid is not expected to reach in the near future.

IFC then sought consultants to serve as stakeholder engagement specialists for the hydro sector before announcing it would help train Laos’ EDL-Generation Public Co., to improve its management of environmental and social risks this past October. The training included lessons in IFC’s Performance Standards and sustainable business practices.

Black & Veatch said that Southeast Asia is one of the fastest-growing regions in the world, with gross domestic product growth rates projected to average 5.4% per year between 2014 and 2018. The company said mini-, small and mid-scale hydropower projects have emerged as viable alternatives to oil and natural gas as energy sources in the region.

“A common misconception is that hydropower is limited to schemes that include large-scale dam development,” Charles Feild, Black & Veatch Asia Pacific Hydropower director, said. “Governments and the investment community are exploring alternatives. Small and mid-scale run-of-river projects can be successfully developed with lower capital start-up costs and, by connecting remote areas to the grid, deliver additional socio-economic benefits for rural communities.”