The research project discussed in this article involved developing tests designed to collect data and measure specific parameters to allow Pacific Gas & Electric to form a standardized method of looking at draft tube issues as they relate to rough operating zones. A rough operating zone is a load or range of loads where turbine draft tube vibration or other parameters are significantly higher than normal. Should these parameters exceed certain criteria, further operation is then restricted, and this becomes the no-run zone. The unit is then added to the list of plants with restricted operational limits.

PG&E in San Francisco, Calif., has an extensive and diverse hydro fleet, with 107 generating units at 67 powerhouses that have a total generating capacity of 3,888 MW. The system includes 98 reservoirs, 73 diversions, 170 dams, 173 miles of canals, 43 miles of flumes, 131 miles of tunnels, 65 miles of pipe and 4 miles of natural waterways. Some of these facilities date back to the previous century, and they range in size from less than 1 MW to 1,200 MW.

Before the electric industry was deregulated in the 1990s, PG&E generated electricity and controlled its transmission. Deregulation eventually led to a daily/hourly electricity auction market called Integrated Forward Market (IFM), run by the California Independent System Operator (ISO). IFM opened up the market to competition. With a major increase in generation from intermittent renewables (i.e., solar and wind mandated by the California Public Utility Commission), the flexibility of PG&E’s hydro generation, in term of its operational flexibility and ancillary service capacity, is increasingly important to help California ISO maintain reliability of the state’s electric grid.

The new operating model put a high demand on PG&E’s generation fleet to remain flexible in terms of spinning reserve, dispatching, day-ahead bidding and other ancillary services. In addition, California’s changing climate has the potential to alter how units are operated.

A list of affected PG&E facilities (see Table 1) documents hydropower units that have a particular load or range of loads where operation is not permitted due to rough operation, or “rough zone.” California ISO also identifies the units that are officially documented by PG&E as forbidden to operate in their respective range of loads. When this project began, PG&E had eight hydro generators that were restricted from operating in a range of loads.

The two questions that needed to be answered were: 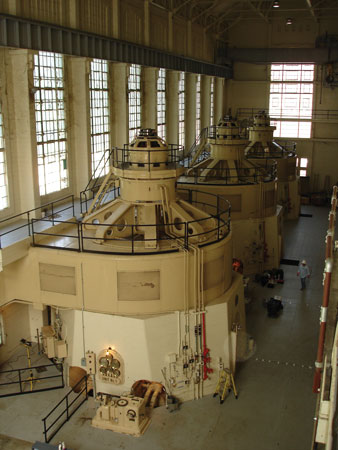 What is a rough zone as it applies to hydro turbine draft tubes? Literature discusses pressure fluctuations as they apply to steady state operation for performing efficiency tests but makes no mention of what is allowable for safe operation.1 A Bureau of Reclamation, U.S. Department of Interior specification for Trinity Powerhouse lists less than 5% peak-to-peak (pk-pk) of net operating head. A search of other Reclamation documents did not reveal any other references to rough zone limits. A turbine upgrade completed in 2016 at PG&E’s Belden hydropower facility included the requirement of peak-to-peak draft tube pressure pulsations of less than 2% of net head. This contract was written in 2011 and the source of this requirement was not referenced.

While defining a rough zone can be difficult, terms used to describe what happens while generating power within a rough zone include: excessive draft tube pressure pulsations, high vibrations, deafening, a washing machine laundering a bag of rocks and swinging MW.

What causes rough zones is much easier to determine: The cause is operation away from the best operating point (BOP). All hydro turbines are designed to have a single BOP. This is typically determined in the design phase and based on where the unit is expected to operate most of the time, as specified by the customer. At the BOP, water exiting the turbine runner has little or no radial component and minimal or no cavitation and exits vertically downward through the draft tube, thus creating smooth operation, with little noise and vibration.

The first reference to problems related to rough zones may be as early as 1907.2

Before this project, PG&E had responded to draft tube rough zone-related problems by implementing industry standard solutions, such as installing draft tube vanes to disrupt swirl, adjusting air inlet valves, and, most recently, installing a new runner and draft tube to resolve rough operating conditions at the Belden Powerhouse. These solutions were not always successful in reducing the rough operating conditions sufficiently to eliminate a no-run zone restriction.

The first question PG&E asked was, “Why were these units restricted from operation?” Typical reasons were excessive noise, draft tube pressure pulsations and vibration. But, how bad is excessive and what constitutes high pressure pulsations, vibration and noise? Draft tube pressure measurements are routinely taken as part of PG&E’s condition assessment program for its hydro fleet, so there is ample data available to review for all of the Francis-type turbines.

No clear pattern emerged indicating a correlation between draft tube pressure pulsations and turbine rough zones. It was apparent that excessive noise and vibrations were relative terms, and restricting operation of a particular unit in a range of loads may have been a subjective determination. Operating history showed the two major areas of concern were draft tube failure and cavitation. Draft tube failures have occurred due to cracking at the walls or ribs, bolt failures and failure of the clamping ring. Cavitation damage has occurred on the draft tube walls, runner and wicket gates. This helped narrow the investigation down to two areas: draft tube vibration and cavitation.

PG&E decided to approach each unit on the no-run zone list individually and try to quantify pressure pulsations and vibration and determine what effects, if any, they had on each draft tube and runner/wicket gates. A test plan was devised to monitor vibration and pressure at various loads and conditions, including changing inlet/outlet conditions (forebay elevation/tailrace elevation).

Before testing each unit, a finite element analysis (FEA) model was built from original plant drawings using Solidworks software. FEA was then completed, which revealed the first three fundamental frequencies and areas of high stress. Figure 1 is an example of an FEA model of a draft tube showing the first mode of vibration. The areas of highest stress were used as the basis for locating strain gages. Early on, it was becoming apparent that high vibration and noise did not necessarily translate to high stress. The question now became, Could units with a no-run zone be run unrestricted without any repairs or design changes to address high vibration or high pressure pulsations?

A standard approach to answering this question was developed:

The 20-MW Grizzly facility is owned by the city of Santa Clara. PG&E has operated and maintained the facility since its commissioning in 1983. From original startup testing, there were observations of high noise and vibration from the draft tube, which resulted in PG&E establishing a no-run zone of 5 to 15 MW.

The forebay can vary in elevation by more than 20 ft, and tailrace elevation can vary by about 16 ft. A concrete weir at the discharge maintains a fairly constant elevation regardless of lake elevation. For this reason, testing was designed to vary the forebay elevation to determine what, if any, effects varying penstock pressure has or if there was an elevation or range of elevations that provided lower rough operating conditions.

Due to ongoing draught conditions, it was difficult to arrange testing at the powerhouse in advance, and it is located in a relatively remote area, about 2.5 hours from the nearest town. For this reason, a remote monitoring system designed by PG&E was installed that provided direct access to the data acquisition equipment through PG&E’s internal network. Testing could begin when adequate water became available.

An FEA model was constructed to determine optimum locations for strain gages. Impact testing was completed to tune the FEA model and the results indicated the first mode fundamental frequency was between 122 Hz and 134 Hz. The variable of the weight of the wheels on the draft tube is the reason for the range of frequencies. The wheels are used during maintenance when the draft tube is removed to allow access to the lower portion of the runner. A fundamental frequency of 128 Hz was calculated, which coincided perfectly with the blade pass frequency of 127.5 Hz.

Testing was completed in October 2015. The two primary frequencies observed for pressure, vibration and strain were 2 Hz, 27% of running speed and 127.5 Hz. The measured frequency of 127.5 Hz coincides with the blade pass frequency. The 2 Hz peak is likely draft tube whirl, while the cause of the single blade pass frequency peak has yet to be determined. An inspection of the wicket gates and turbine did reveal erosion at one wicket gate that could allow a jet of water to enter under the wicket gate and impact each blade as it passes. This is still under investigation.

Draft tube pressure fluctuations of 25 psi pk-pk are 8.3% of the turbine inlet pressure, and vibration sensors on the draft tube walls were measuring 3 inches per second (ips) at 8.5 MW, in the middle of the no-run zone. These values were marginal in terms of indicating a rough operating condition.

It is the strain gage data that revealed the most valuable information. Strain values of 180 Î¼strain (microstrain – the strain producing a deformation of one part per million or 10-6), were measured at the draft tube whirl frequency of 2 Hz. At this load, there is virtually no strain at the vane pass frequency of 127.5 Hz. The strain gage data revealed high enough values to warrant further calculations to determine if fatigue would be an issue. Because this unit had not been run between 5 MW to 15 MW for some time, there was no historical data to estimate the number of running hours to calculate the cycles to failure at 2 Hz. PG&E’s Energy Trading Department was consulted and the test used an estimate of less than 50% of the time this unit would be at these loads. Plotting the estimated number of cycles and the calculated equivalent stresses for carbon steel put the value just below the fatigue limit.

The FEA analysis had indicated a high-stress area at the upper edge of the support plate for the wheel attachment. As a final test, the unit was run at the rough operating zone with one of the wheels attached, then removed. A dramatic reduction in strain was recorded.

Due to the complexities of the California energy markets, a financial model to look at the lost revenue of a no-run zone was not able to be constructed until more market data are gathered under non-restricted operations. These data will be collected once units are returned to unrestricted operation.

What did evolve from this project was a standardized method of looking at draft tube issues as they relate to rough operating zones or no-run zones. Each unit is looked at individually, from the design of the draft tube to the operating conditions under which they generate. Tests are then designed to collect data and measure specific parameters (i.e., pressure, vibration, strain) and evaluated for short-term failure or more long-term failure from fatigue. FEA has proved to be invaluable for determining resonant frequencies and high-stress areas and evaluating potential design changes. Data collected on units removed from the no-run zone may help construct financial models to evaluate lost revenue.