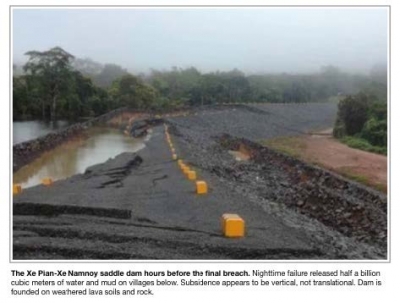 Richard Meehan, a Stanford University researcher, has concluded that the failure of the Xe-Pian Xe-Namnoy hydro project in southern Laos can be attributed to the extended western arm of the reservoir being built on a sinkhole.

The failure occurred on July 23, 2018, leading to the confirmed death of at least 40 persons. The reservoir behind the dam, which impounds water for a hydroelectric facility with a capacity of 410 MW, had just been filled. The failure sent a half-billion cubic meter cascade of muddy water over a 200-meter waterfall.

Meehan began his engineering career designing and building dams in Thailand and has taught courses for many years at Stanford’s School of Earth Sciences and also at the Blume Earthquake Engineering Center. He has been investigating the dam’s failure from Bangkok using new space technologies.

Below is an explanation of his work and findings:

The world-wide ground elevation dataset SRTM 1-arc second (ground elevations on a 30-meter grid for most of the earth), made available in 2015 by NASA, finds applications in understanding of global hazardous conditions and disasters, new and old.

Explanations for the failure have previously been announced, with some blaming it on excessive rain and others on substandard saddle dam construction. As of the end of September 2018, official investigations had reportedly not yet been started in part because of difficulty in accessing the high plateau but also because of the unexpected appointment of independent investigators by various parties and their lawyers, suggesting the likelihood of prolonged adversarial investigations.

But satellite ground elevation data and imagery, when combined with readily available archival information from mineral explorations, along with experience on dam projects in similar terrain in nearby Northeast Thailand and in other comparable areas of tropical soils, show that this extended western arm of the reservoir was built on a sinkhole — a dry basin that probably never, even over millennia, had retained any of the heavy (1-4 meters) summer rainfall that drenched the plateau.

The failure hypothesis goes as follows: On the first filling of the reservoir, a wave of groundwater from the main reservoir pushed southwest, eventually filling the dry basin behind the saddle dam with 20 m of water. The progress of the underground wave can be tracked by rising springs visible on cloud-piercing satellite images from the Sentinel 1 satellite. Rising water pressures, still within the normal operating specifications for the project but unprecedented in geological time, enlarged underground free-draining conduits within the naturally fragile basalt ridge line that supported the saddle dam. With a rising water level and loss of support, the brittle earthfill dam began to sink into the void and crack extensively. The rising reservoir then cascaded over or through the fragmented crest, washing away the remnants of the dam and 15 meters of erodible foundation and spilling half a billion cubic meters of water and debris.

Aside from the telltale dry basin, other known risk factors were present: geological formations with known high subsurface water mobility and storage, including presence of volcanic lavas with high leakage potential at local (soil-filled joints) and larger scale (collapse features such as lava tubes, caves and possibly exploded features from flash water vaporization); an interface between lava and very old sedimentary rocks with weathered cracks and voids along with stress conditions favoring expanded flows under increased pressure; and tropical soil weathering profiles long known by dam builders for their instability. The dam embankment consisted almost entirely of fill composed of local residual soils susceptible to rapid internal erosion and disintegration when cracked and subjected to high water pressures.

These high risk factors raise the question of whether this type of tropical geography is suitable for the aggressive and loosely managed “hydropower rush” that is now under way in remote regions of Laos. Whether the predictable foundation and water retention problems advanced were ever investigated or considered during construction of the saddle dam is not known.