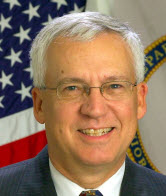 Steven L. Stockton, Director of Civil Works with the U.S. Army Corps of Engineers, is presenting a plenary address to kick off the seven-session Water Resources track at HydroVision International 2014 this week.

The event, being held in Nashville, Tenn., July 22 through 25, is expected to attract about 3,000 attendees from more than 50 countries. It also features an exhibit hall with information on more than 330 companies providing products and services to the global hydroelectric industry.

The topic of Stockton’s discussion will be “Managing Water Resources in a Changing World.”

Environmental sustainability is a guiding principle of the Corps. USACE is the largest owner and operator of hydroelectric projects in the United States, and one of the largest in the world. The Corps’ hydropower portfolio includes 75 plants that have a cumulative output capacity of 20,747 MW, which equates to nearly a third of the nation’s total hydroelectric output.

Stockton shares the responsibilities of the Deputy Commanding General, Civil and Emergency Operations, for managing and directing the policy development, programming, planning, design, construction, emergency response, operation and maintenance activities of the Army Civil Works Program. This is a $5 billion annual program of water and related land resources of the United States.