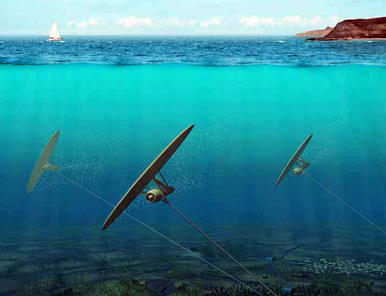 Marine power technology developer Minesto has identified Wales as a possible location for a full-scale deployment of its “Deep Green” generating systems.

The company said it identified the Welsh waters as a potential site after extensive research on the sea’s conditions by SEACAMS, which is a collaborative think tank comprised of three Welsh universities.

SEACAMS collected data on tidal currents and seabed conditions, which was then evaluated by Minesto.

“We see great potential for marine energy in Wales,” CEO Anders Jansson said. “This could bring highly qualified job opportunities to the region and also build expertise in marine energy.”

Minesto said the Welsh government has made the development of marine and hydrokinetic energy a priority, with a recent government report showing MHK technologies could boost the country’s economy by more than US$1.3 billion per year.

The company describes the Deep Green system as an “underwater kite, comprised of a wing and a turbine which is secured to the seabed with a tether.” The unit then “moves with great speed in an 8-shaped path in the tidal or ocean current”, thus spinning the turbine and generating power.

HydroWorld.com reported in November 2012 that Minesto was preparing to begin new testing of its Deep Green turbine. The company was awarded a Crown Estate license for research in Northern Ireland’s Strangford Lough in December 2011.