The Bonneville Power Administration (BPA) is using a software program called CBfish.org to track and measure specific results of fish and wildlife restoration work in the Columbia River Basin.

BPA and its partners manage the Columbia Basin Fish and Wildlife Program to protect, mitigate, enhance, and recover fish and wildlife populations in the Columbia River Basin that are affected by operation of the Federal Columbia River Power System (FCRPS). FCRPS is a collaboration between BPA, the U.S. Army Corps of Engineers, and the U.S. Department of the Interior’s Bureau of Reclamation to maximize use of the Columbia River by generating electricity; protecting fish and wildlife; reducing flood damage; providing irrigation, navigation, and recreation; and sustaining cultural resources. Partners in the program include the Northwest Power and Conservation Council; Columbia Basin tribes; and federal, state, and private organizations.

BPA worked with Sitka Technology Group in Portland, Ore., to develop CBfish.org. CBfish.org is both a web application that enables BPA and its partners to manage restoration activities and an interactive website that provides the public view into the restoration program.

Tools in the software are:

— Portfolio, which enables dynamic grouping of projects so users can construct custom portfolios for independent analysis and reporting;

— Map, which allows for review of progress based on maps showing project areas and individual work sites;

— Fund management, which provides a transparent view into how the program’s budget is allocated;

— Budget scenario, which allows analysts to ask and answer “what if” questions by comparing scenarios;

— Transparency, which helps partner organizations track progress in meeting their obligations under the program. 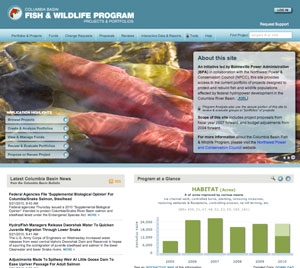 The system tracks all projects since the program began in 1980 and has budget decisions back to 2004.

The U.S. Department of the Interior’s Bureau of Reclamation has seven hydrogen-based fuel cells installed at its hydroelectric plants and remote communication sites.

Reclamation initiated the use of these fuel cells in 2002 as part of a research and demonstration project. The fuel cells used were purchased from ReliOn Inc. and are 1,000-watt units rated for continuous load of 20 amps at 48 volts direct current, Myers says. The first unit was installed in October 2003 at the 38.2-MW Pole Hill plant in Colorado. After successful deployment at that facility, six additional units were installed across the state. The fuel cells are in vastly different locations, including mountain passes at elevations of 12,000 feet, where snowfall easily can exceed 150 inches per year, he says.

In addition, the fuel cells are modular, allowing for quick and easy replacement of failed components. Replacement of an entire system requires only basic hand tools, Myers says. The fuel cell stacks can be replaced in less than one minute.

Although the fuel cells primarily are used for communication systems, Reclamation may use them for power plant control and protection systems in the future, Myers says.

Manitoba Hydro is in the process of building a High Voltage Test Facility. When it is complete, this facility will be one of only four in Canada that can be used to test 550-kilovolt (kV) alternating and 500-kW direct current equipment, says Scott Powell, communications officer with Manitoba Hydro.

The facility, to be located Winnipeg, Manitoba, will bring all of the utility’s high-voltage testing under one roof. It will greatly expand the company’s ability to test equipment (such as bushings, transformers, and aerial lift devices) before it goes into service, Powell says. Work on the facility is expected to be complete by the fall of 2011.

William M. McDermid, P.Eng., is director of the facility. McDermid has performed significant work with stator windings, Powell says. Some defects in stator windings of large generators produce high-frequency pulses termed partial discharges (PD), and these can be measured with the machine in normal operation but need to be separated from external noises. McDermid helped to develop the concept of detecting discharges from the winding based on the time of arrival of the PD pulses. In the late 1970s, he demonstrated that the PD pulses experience considerable reduction in magnitude as they travel through the winding.

McDermid’s work is part of a cluster of developments that have resulted in the PDA/TGA tests now being applied to more than 12,000 machines around the world, Powell says. This technology is used on virtually all generators with a capacity of greater than 20 MW in Canada, and perhaps more than 75 percent of all generators in the U.S., to prioritize winding maintenance, he says.

The Institute of Electrical and Electronics Engineers Inc. (IEEE) presented McDermid with its 2009 Electric Power Engineering Award. IEEE cited his outstanding contributions to the development of diagnostic test methods for the insulation systems of rotating machines.

For example, in October 2009, Florida Power and Light Company (FPL) was penalized $25 million as a result of a February 2008 blackout. The blackout was determined to have been caused by the failure of the circuit switcher’s bottle interrupter in FLP’s Flagami Substation. FPL entered into a Stipulation and Consent Agreement with NERC and agreed to pay a civil penalty.

This NERC Database is intended to facilitate compliance with the notices of penalty by streamlining the enforcement actions taken by NERC and the eight regional entities. Summaries of notices are organized by reliability standard and focus on the facts NERC identified as important to reaching the penalty amount proposed. Each summary is linked to the publicly available notice of penalty filed by NERC and the related Federal Energy Regulatory Commission order.

For example, 26 standards are listed under Protection and Control; 11 of these have associated notices of penalty.

The database is on the Internet at www.whitecase.com/nerc.