Water pollution can occur as a result of an oil spill from a hydroelectric facility. Kaplan turbines in particular present challenges because of the amount of oil used for these units. A Kaplan is a propeller-type unit with two or more adjustable blades. This type of unit is frequently used at low-head sites with high flow. The hub of a Kaplan turbine typically is filled with pressurized oil to equalize pressure compared with the outside water pressure, as well as lubricate internal mechanisms. And the servomotor uses oil as a hydraulic fluid. One common reason for oil leakage from these units is failure of the blade trunnion seals.

Although the overall risk hydro presents is small, several methods are available that allow facility owners to reduce the amount of oil used to lubricate Kaplan turbines. These include replacing the oil in the hub with air or water, installing an electric servomotor, and using hydrostatic water guide bearings.

Converting to an air-filled hub

Vattenfall converted a Kaplan unit at its 155 MW Forsmo plant in Sweden from a low-pressure servomotor and oil-filled hub to a high-pressure servomotor and oil-free hub. This work was intended to help Vattenfall reduce oil used at the plant and to decrease the risk of oil leakage from the unit. Waplans Mekaniska Verkstad AB (now Andritz Hydro AB) of Sweden converted the unit in 2005, and it has now operated successfully for five years. This experience shows that it is feasible to convert an existing runner instead of installing a new runner, as long as the issue of increased friction is addressed.

Vattenfall has two important internal targets with regard to oil at its hydro facilities. These targets are to reduce the total oil volume in the facilities by increasing the pressure under which the oil operates and to reduce the risk of oil leakage from Kaplan runners.

The conversion work was performed on Unit 4 at Forsmo, on the Angermanalven River. This plant began operating in 1957. Vattenfall chose this plant because full capacity is not always required, so having one of the four units off line would not result in a high loss of production at the facility. Unit 4 was chosen because it was due to be off line for a scheduled routine rehabilitation.

Runner diameter for Unit 4 is 4.4 meters. The original servomotor on Unit 4 operated with oil pressure of 20 bar, and the runner hub was filled with about 3,000 liters of oil. As Figure 1 shows, the new arrangement consists of a high-pressure servomotor with a stationary piston rod, an oil-free runner hub filled with air, and self-lubricating bearings with stainless steel counter surfaces (i.e., surfaces against which the self-lubricating bearings run). This arrangement makes the servomotor accessible from the bottom of the runner without a complete disassembly of the unit. 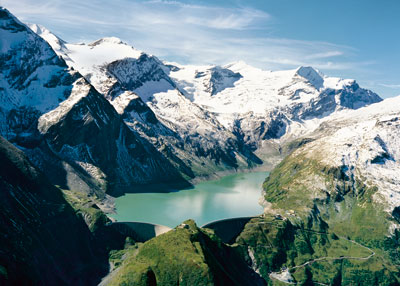 Waplans Mekaniska Verkstad designed the new arrangement. In 2005, the company modified the existing components, manufactured the new components, and performed on-site assembly and installation of the high-pressure, oil-free hub.

While this work was being done, Vattenfall upgraded Unit 4 to self-lubricated guide vane and guide vane mechanism bearings, as well as a new high-pressure governing system. This additional work was performed as part of the unit rehabilitation. This work contributed to the goals of reducing oil volume in the unit (by installing self-lubricated bearings and increasing the operating pressure) and eliminating the use of grease.

Since the modification, the Unit 4 runner has operated successfully, with no required maintenance. The unit has been run almost continuously since the conversion.

The concept of using units with high-pressure servomotors and oil-free hubs has been applied for 11 new runners at Vattenfall plants between 1997 and 2010. In addition, Vattenfall plans to use this arrangement for new runners for another six units, to be installed through 2014.

Toshiba Corp. has installed 43 Kaplan and Deriaz units with oil-free runner hubs since 1987. The largest of these installations has a capacity of 43.6 MW, with a maximum runner size of 5.3 meters. Many of these have featured air-filled hubs. Although no special maintenance is necessary for these units, it is important to install and monitor a water collection pipe below the oil seals of the operating rod. If leakage appears in this pipe, it signals a possible failure of the blade trunnion seal.

Filling the hub with water

In addition to filling Kaplan runner hubs with air, Toshiba has designed units in which the hubs are filled with non-pressurized water. For example, the company performed this conversion on a 37 MW unit at Tohoku Electric Power Co. Inc.’s Miyashita project in Fukushima, Japan.

For this application, material selection is important to ensure adequate corrosion protection. (This is also a concern for air-filled hubs because of the possibility of water intruding in the event of a seal failure.) In addition, measures must be implemented that allow detection of seal failure, which may occur during unit operation.

For a water-filled hub, anti-corrosion liquid should be mixed with the water filling the hub. This additive needs to be nontoxic so it creates no danger if accidentally released into the river. To further ensure corrosion protection, some components of the linkage mechanism must be made of stainless steel. These include the runner blades, all moving components, and, optionally, the blade operating rod. Other elements may be made of carbon steel, with application of paint as protection against corrosion. These include the hub itself, the turbine shaft, and the blade operating rod.

The leakage detection system for this unit consists of a water collection pipe located below the oil seals of the operating rod. This pipe is used to check for incoming river water. If leakage appears in the pipe, it is a sign that the blade trunnion seals have been worn out and should be replaced. And if the blade servomotor is oil-driven, an oil detection device should be installed in the upper part of the turbine shaft, far from its contact with water.

Alstom Hydro has implemented this solution on several Kaplan units, including Unit 3 at the Stadsforsen plant on the Indalsalven River and Unit 1 at the Grundfors plant on the Ume River. Both plants, in Sweden, are owned by Vattenfall AB Vattenkraft. The Stadsforsen unit, converted in 2005, had a capacity of 43.6 MW and was 5.51 meters in diameter. The Grundfors unit, converted in 2007, has a capacity of 45.7 MW and is 4.87 meters in diameter.

For these conversions, undertaken as part of refurbishment work at these facilities, the design of the runner remained traditional. However, Alstom installed a water-filled hub, complete with self-lubricating bushings inside the hub. All bearings are made of self-lubricated material, lubricated by water. The blade servomotor continues to use oil as a hydraulic fluid.

Another way to minimize oil use in a Kaplan turbine is to convert the servomotor from oil-driven into an electric servomotor. This conversion eliminates the oil required to drive this piece of equipment. But designing such a system presents some difficulties because the mechanism must rotate with the runner, and feedback on blade position must be provided to the governor.

Toshiba has a design for this function that consists of a ball screw or roller screw, combined with a planetary mechanism. The system is driven by an alternating current motor set on the generator top cover. Motor rotation is translated to a turbine shaft of any speed through the proper combination of the planetary gear elements. Then this rotation speed is reduced to the required runner vane operating speed by the other planetary gear elements. This movement is translated to a linear movement of the blade-controlling mechanism by the ball screw or roller screw. Difficulties involved with this system include the fact that the motor speed and shaft speed are different and the system must work under any shaft speed, including outside the rated speed of the unit.

Toshiba installed the first electric servomotor on a Kaplan turbine in 1995 at the 4.1 MW Nakaiwa project in Tochigi, Japan, owned by Tokyo Electric Power Co. Toshiba has since installed three more. All four of these units were installations of new equipment and not retrofits of existing units. It is impractical to modify units to use electric servomotors because of the difference in the space required for the two types of servomotors. The largest unit converted has a capacity of 10.5 MW and operates at 56.3 meters of head. This unit, at the Shin-cyubetsu plant in Hokkaido, Japan, owned by Hokkaido Electric Power Co., has been operating since 2006.

In addition, Toshiba has used electric servomotors on several Kaplan units to operate the turbine inlet valve. The company installed the first electrical turbine inlet valve operator in 1985. There are 90 units equipped with this new mechanism now operating that were installed by Toshiba. The largest is for a 3.5 meter valve operating under 36.9 meters of head. This application has been in operation since 1993.

Alstom Hydro has converted many turbines (primarily Francis, but this technology is available for Kaplan turbines as well) to use hydrostatic water guide bearings. This technology originally was developed by Alstom. This type of bearing uses filtered pressurized water from the penstock to lubricate and cool the bearing and to support the radial loads while centering the shaft line. By replacing oil lubrication of the bearing, the risk of polluting the river with oil is eliminated.

For this arrangement, a thin layer of water is injected through recesses located in the guide bearing shell. This water is distributed on the inner surface of the bearing, forming a lubricating film around the shaft.

Any shaft misalignment causes an increase in pressure on one side of the bearing. This generates a load capacity to correct the shaft position. The hydrostatic water bearing can act on the shaft even when there is no rotation, ensuring performance during starting, stopping, transient, and low-speed periods.

In addition to its principal bearing function, the bearing also acts as a shaft seal. This arrangement allows the bearing to be located closer to the runner and, in combination with a higher bearing stiffness, reduces gaps in the labyrinths. This results in a significant improvement in plant efficiency, as well as less maintenance because of the lack of a shaft seal.

In addition to the obvious environmental benefit, this type of seal also reduces friction losses by about 50% while increasing plant availability and reducing operating and maintenance costs.

In general, oil-free systems cost about the same as traditional oil-operated mechanisms, according to Toshiba. Overall, it does cost more to install an oil-free device. For example, an oil-free Kaplan runner may be 5 — 10% more expensive than a traditional runner because of the self-lubricated bushings and stainless steel parts. However, cost savings occur because of the lack of a need for fire protection and the fewer auxiliary systems required compared with traditional oil filled designs.