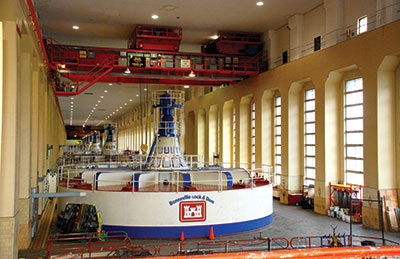 When access to spare parts for the Bonneville First Powerhouse became a critical issue, the U.S. Army Corps of Engineers ordered two spare bearings. The bearings have been delivered, after a challenging design and manufacturing process.

The contract for this work, which was awarded to American Babbitt Bearing in Huntington, W.Va., in April 2014, also included an option item to provide an additional bearing for the facility. The company began manufacturing work on this bearing in December 2014.

These cylindrical fit, shell-type bearings have a nominal inner diameter of 42.5 inches, an outside diameter of 77.5 inches and a height of 43.5 inches. Each has a total weight of about 15,000 pounds.

The work is part of an ongoing modernization of the facility on the Columbia River between Washington and Oregon.

The existing bearings at the hydro plant are original, furnished circa 1940 by turbine manufacturer S. Morgan Smith. The guide bearings for most, if not all 10, units were refurbished in conjunction with a major powerhouse rehabilitation that took place from about 1997 to 2011. One of the 10 bearings was unable to be refurbished due to the inability to obtain a suitable babbitt bond. Instead, the original spare bearing was used for this unit, leaving the First Powerhouse without a spare turbine guide bearing.

In 2012, the Corps and Bonneville Power Administration conducted an assessment of critical spare part availability at hydropower plants in the region. Bonneville First Powerhouse was identified as at risk due to a lack of serviceable spare guide bearings for Units 3 through 10. In addition, the oil from the Unit 10 turbine guide bearing was exhibiting elevated levels of babbitt material, indicating an increased risk of bearing failure. Acquisition of two new guide bearings (for use as spares, one for Units 3 and 4 and one for Units 5 through 10) and an option of a third for Unit 10 would permit timely replacement of a failed bearing and provide for a spare set.

The spare bearings are essentially identical to the existing turbine guide bearings. Similar-sized bearings have been provided by other bearing manufacturers for use at other Corps hydro sites. For example, the John Day guide bearing has an outside diameter of 68.5 inches and was supplied in 2006 by PME.

Manufacturing these particular bearings was a challenge in several ways. First, they had to be manufactured to closely match the existing turbine guide bearings at the facility, which were provided by S. Morgan Smith in 1941. Second, the sheer size of the bearings was challenging. Although the company’s equipment provides the capability of manufacturing centrifugally cast bearings up to 120 inches in outer diameter, typically, bearings American Babbitt produces range in size from an outside diameter of 30 to 65 inches. Third, tolerances specified by the Corps’ Hydroelectric Design Center for these replacement bearings were less than 0.002 inch, requiring precision work.

Manufacturing engineer Mike Rowe with American Babbitt took on the task of creating new blueprints for fabricating, producing and ensuring the new bearings would meet acceptance criteria as provided by the Corps. Rowe also created work processes so that every step in the manufacturing process had internal check and hold points. This allowed for the identification and correction of any deviance before going to the next step.

The base material specified in the contract was ASTM A 516 Grade 70, fully annealed and vacuum degassed, rather than the more typical and less costly A36 plate. This material did not distort during the fabrication, heat treating or machining of the bearing, ensuring repeatability for tolerances and dimensions. The only drawback to this material was availability and time of delivery. Using this material meant delivery took three to four weeks longer.

The first two bearings passed final inspection by Corps personnel in October 2014, and the finished bearings were received at site on Nov. 12, 2014. A contract option for a third bearing was exercised in November 2014. The third bearing is being manufactured, and it is expected to be finalized in April 2015.

The Unit 10 bearing has not yet been replaced. The bearing is being monitored, and Corps personnel have not observed unusual operating temperatures or indications of abnormal wear. Bearing monitoring will continue.

The total cost to obtain these three bearings was 18,500.

Good seals are an important element of a well-functioning hydroelectric facility. Below is information, taken from our online Suppliers Directory (formerly called the Buyer’s Guide), about the companies that manufacture or supply seals that will be exhibiting at HydroVision International this July in Portland, Ore. If you’re looking for this equipment, this is a great chance to stop by their booths and learn more!

Fematics Canada, #10058
The company has provided custom engineering and manufacturing of “fully controllable” mechanical seals and sealing solutions for the hydro turbine, pulp and paper, chemicals and mining industries worldwide for more than 50 years. Its products include new designs to save downtime and increase life.

Fugesco, #9070
Fugesco designs and manufactures a wide range of split mechanical seals and sealing systems for small, medium and large shafts specially adapted to user needs and specifications. We can help reduce downtime and save money.

Seals Unlimited, #6079
Seals Unlimited has extensive rubber gate seal molding and extrusion capabilities as well as the experience and knowledge necessary for service to the hydro and power generation industries. Its products are used in dams, navigation locks, flood control, and fish mitigation facilities and are shipped throughout the world.

Wartsila Hydro and Industrial, #3047
Wartsila is a global supplier of mechanical seals, composite and white metal bearings and cavitation repair. With 18,000 employees in more than 170 offices worldwide, we pride ourselves on being where you need us, when you need us.

See it for yourself!

There is a unique opportunity for readers of Hydro Review to visit the 1,218-MW Bonneville project. Bonneville is one of the destinations featured during the technical tours that will take place at HydroVision International 2015 in Portland, Ore.

The Bonneville tour is Tuesday, July 14. Space is limited, so register now to ensure a spot. Registrations must be received by May 15. Sign up today at www.hydroevent.com/register.html.