More
Home Environmental Three “Generations” of Hydro at One Site

Electricity has been produced at Lake Vyrnwy for 114 years, from three generations of turbine-generator units, and capacity has grown from 22.4 kW to 130 kW. This long-lasting facility was inducted into the Hydro Hall of Fame in 2017.

By Peter Doughty and Peter Edney

There is a relatively “young” hydro turbine operating at Severn Trent Water’s Lake Vyrnwy in Mid-Wales. This unit has been in operation since 2009, but the site has actually been producing electricity for a staggering 114 years.

It was 1903 when the first Francis turbine, manufactured by Gilkes, was installed next to the reservoir in the beautiful scenery of Montgomeryshire. It provided a capacity of 22.4 kW, and the electricity produced was distributed to nearby homes and businesses. The turbine was introduced more than a decade after Lake Vyrnwy was created to provide the growing population of Liverpool with fresh water.

This historic facility was inducted into the Hydro Hall of Fame in 2017, at HydroVision International, and this article provides insight into the development and continued operation of Lake Vyrnwy hydropower. 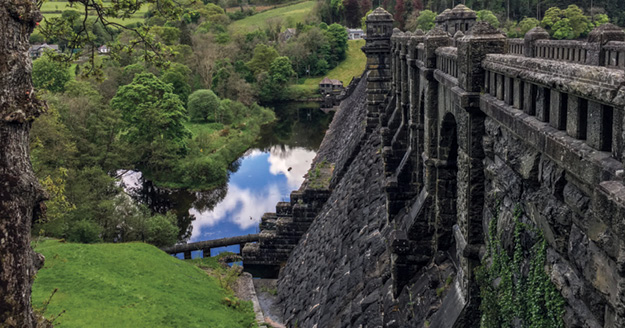 This is the downstream view of the Vyrnwy Dam face as it appears today.

Design and planning for Vyrnwy Dam began in 1879. In 1880, the UK parliament passed the Liverpool Corporation Waterworks Act, seeking to secure a reliable water supply for the fast-growing city.

The newly formed Liverpool Corporation quickly began preparations and planning regarding putting together the work force and equipment that would be necessary to construct what would become the first large masonry dam in Britain and the largest artificial reservoir in Europe at the time.

More than a century ago, the Vyrnwy Valley looked very different. It was a sparsely populated area used predominantly for upland sheep farming. Then the valley of the River Vyrnwy was closed off by the building of the dam and the entire valley was flooded when the reservoir was filled. The creation of the lake would involve relocating the former village of Llanwddyn, which consisted of a parish church, two chapels, three inns, 37 houses in the village and 10 farmhouses. The farms and their land were also submerged below the water. In dry summers, the water level in the lake sometimes drops far enough to expose the ruins of the old village. 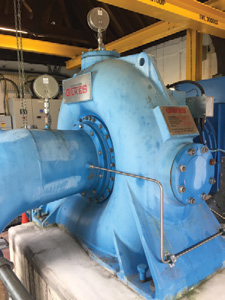 The new settlement was built lower down the valley, and even the graveyard was relocated along with the church.

The dam that created Lake Vyrnwy was particularly unique for its time, as it was the first in Europe to be designed to carry water over its crest instead of in a channel at the side. This design was chosen because of the high volume of rainfall at the site. This enabled the excess rainfall to carry on its journey down the river system. At the bottom of the dam, the stilling basin absorbs the resultant energy when the water flows over the crest and stops the water from eroding the foundations of the dam. Spill at this dam may occur for almost three months of the year, depending on the rainfall during the winter months.

The stone for the dam masonry was obtained from a quarry that was specially opened up in the valley on the eastern side of what is now the lake. Motorized vehicles were not yet commercially viable, so all other materials were brought by horse and cart from the railway station at Llanfyllin, 10 miles away. Stabling for up to 100 horses was built in Llanfyllin, and at its busiest stages the labor force peaked at more than 1,000 men. Many of the laborers were stone masons working in the quarry, dressing the stone. Due to its physical size, these Welsh slate stones were extremely difficult to handle. Just over half a million tons of stone was used. The work began in July 1881 and was completed in 1891.

The dam is 84 ft high from the bed of the lake to the overflow, and the foundations are almost as deep again. It is 1,172 ft long and 120 ft thick at the base. The lake took two years to fill and first supplied water to Liverpool in 1892. The reservoir is 216 ft deep at its deepest point and the road around the perimeter is almost 12 miles long.

The building of the dam was not the only engineering feat necessary for the provision of a water supply. Equally vital was the creation of a suitable means of conveying the water to Liverpool. The water’s 68-mile-long journey, from where the rain fell in the Welsh hills to the distribution system in Liverpool, started at the straining tower on the lake, designed to both strain the water through huge wire-gauge filters and to regulate the level of draw-off.

Into a specially designed tunnel was placed the first of three 42-inch-diameter riveted steel pipes. Along the route of this massive pipe, capable of carrying 13 million gallons a day, two balancing reservoirs and filtration works were also constructed.

On July 14, 1892, the first water successfully flowed into the city of Liverpool. Over the following years, further studies were undertaken and steps were taken to increase the amount of water that could be drawn off the lake. 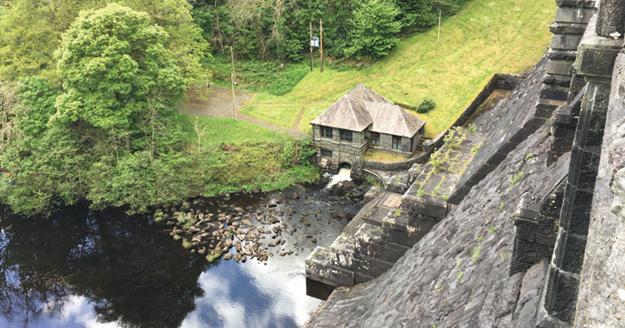 The 130-kW Lake Vyrnwy hydro project has been in operation for 114 years. Watch the plant’s induction into the 2017 Hydro Hall of Fame at the following link: http://bit.ly/2xP35bb.

In 1903, Liverpool Corporation introduced the first hydroelectric project, utilizing a turbine manufactured by Gilkes, at the foot of the dam. A small powerhouse was built using local stone to blend in with the dam. This powerhouse was added to generate electricity from the dam’s compensation flow, which is necessary to keep the River Vyrnwy from drying out. The power was initially distributed locally to the village houses, offices, dam works and a local hotel.

An official ceremony in 1910 was conducted by the then-HRH the Prince of Wales to mark the completion of the further works, where indirect catchments were diverted into the reservoir behind the dam.

The scheme was successfully redeveloped with two Gilkes Francis turbines in 1940. The dual turbines provided a total capacity of 45.2 kW, rotating at a speed of 1,250 rpm.

The project ran in an islanded electrical mode as a mini-grid until 1960, when commercial distribution via the UK’s National Grid was connected in the area. At this point, the project was modified and the generated electricity was exported onto the National Grid, for distribution to other areas of the country as needed.

After the Water Act of 1974 was passed, Lake Vyrnwy passed from the control of Liverpool Corporation to the Severn Trent Water Authority, which was formed that same year as a regional, state-owned water authority responsible for water management and supply and wastewater treatment and disposal in the catchment areas of the Severn and Trent rivers.

The turbines continued to be maintained by Gilkes and remained in place for 69 years, until the current machinery was installed in 2009. The new turbine, a larger single Gilkes Francis turbine, was located in the same powerhouse. This new turbine has a capacity of 130 kW and rotates at a speed of 750 rpm. Installation of the new turbine, and thus expansion of the facility’s generating capacity, allows Severn Trent Waterway to sign up to the governments initiative, the UK’s Feed-In-Tariff (FIT) incentive program. The turbines that were removed were still found to be in reliable operating condition and in 2009 were re-installed without any modifications at a small project in Malawi in Africa. They still generate electricity today. 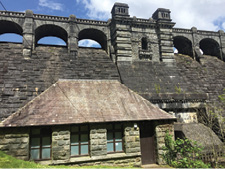 The powerhouse view from downstream.

The new turbine also forms part of Severn Trent’s pledge to renewable energy which, alongside hydro, sees the company using anaerobic digestion, solar panels and wind turbines to generate green power. In total, Severn Trent generates about 34% of its electricity from renewable sources and has ambitions to increase that to 50% by 2020.

Almost 125 years since its completion, Lake Vyrnwy continues to supply Liverpool with fresh water, and this hydro facility has been a clean, reliable, and environmentally friendly electricity source for 112 of those years.

The Lake Vyrnwy project is truly one of Wales’ hidden gems for beauty, nature and conservation. The 23,000 acres of upland moorland is registered as a Site of Special Scientific Interest and is managed in partnership with the Royal Society of the Protection of Birds, which maintains the catchment to ensure the balance of the protection of the water supply and sustainability of wildlife
in the majestic Berwyn Mountains.

This project will form part of Severn Trent’s approach to green power for many years to come. Addition of the new turbine provides an anticipated facility life of 25 years before major components are replaced. 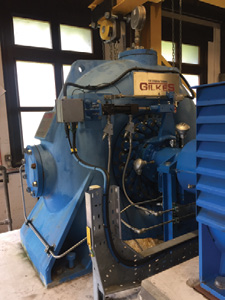