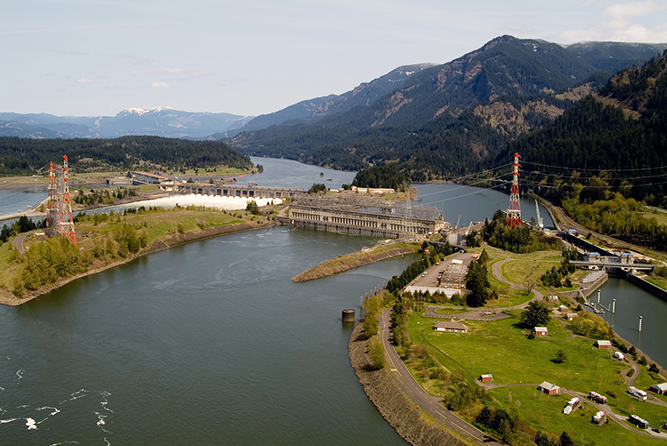 Attendees at HydroVision International 2015 have the opportunity to choose from several different technical tours to nearby hydroelectric facilities.

HydroVision International, the world’s largest hydroelectric industry event, is behind held the week of July 13 at the Oregon Convention Center in Portland, Ore., U.S.

The Lewis River: Merwin and Swift Dam Projects tour takes participants to these two facilities in southwestern Washington. The 136-MW Merwin Dam and 240-MW Swift Dam are two of the three powerhouses in the 510-MW Lewis River Hydroelectric Project owned and operated by PacifiCorp. These projects are located in a scenic area near Mt. St. Helens in the Cascade mountain range. Merwin Dam, which began operating in 1931, features an upstream fish collection and transport facility that was completed in 2014. And a floating surface collector installed in the reservoir behind Swift Dam attracts juvenile fish, which are then trucked downstream and released below Merwin Dam.

This tour is limited to the first 30 registrants, and registrations must be received by June 29. The tour costs $125.

The Clackamas River: River Mill, Faraday and North Fork Projects tour features three of Portland General Electric’s hydro projects in its Clackamas Project on the Clackamas River. The project features the longest operating fish ladder in the world, at 1.9 miles in length. The 25-MW River Mill facility features the only surviving Ambursen-type dam west of the Mississippi River. The 46-MW Faraday project was completed in 1911 and was unique for its time in that a diversion dam was built to convey water through a canal to a man-made lake. And a new surface collector for salmon is expected to be floated into place at the 58-MW North Fork facility about the time this tour is going on.

This tour is limited to the first 50 registrants, and registrations must be received by July 12. The tour costs $125.

The half-day tour on Tuesday, July 14, takes attendees to the 1,077-MW Bonneville facility on the Columbia River. The First Powerhouse at this dam is currently undergoing a rehabilitation. And fish passage is important at this facility, as it is the last dam on the river before it enters the Pacific Ocean. The dam features fish ladders that provide an elevation gain of 60 feet and are used to transport a variety of anadromous fish to their spawning grounds.

This tour is limited to the first 50 registrants, and registrations must be received by May 15. The tour costs $75.

In addition, a technical tour of the T.W. Sullivan facility will be offered to attendees of the Waterpower Hydro Basics Course, on a first-come, first-served basis. This powerhouse was built in 1895 and was inducted into Hydro Review’s Hydro Hall of Fame in 1995.

Include one of these technical tours in your HydroVision International plans and take advantage of an irreplaceable opportunity to learn about the challenges faced and overcome at hydro facilities in the Pacific Northwest.