With a global emphasis on reducing carbon emissions, hydropower has come to the forefront as an effective means of balancing other forms of renewable generation. Hydro’s role in the modern power mix has led to favorable climates for development, translating to the construction of new plants and the upgrade of existing projects.

Although climate change mitigation through the worldwide reduction of greenhouse gas emissions has long been a topic of hot debate, no single mechanism perhaps better exemplifies a true global commitment to true, tangible shifts than the Paris Climate Accord.

The accord, agreed on by 195 countries from around the world during the United Nations Conference of Parties in December 2015, establishes sweeping, long-term ecological and economic targets.

And although the accord does not specifically cite hydro – nor any other lone form of generation, for that matter – as the catalyst that will guarantee the proposal’s success, data shows that both public and private power producers around the world continue to develop hydro, often citing its cleanliness as a primary consideration. 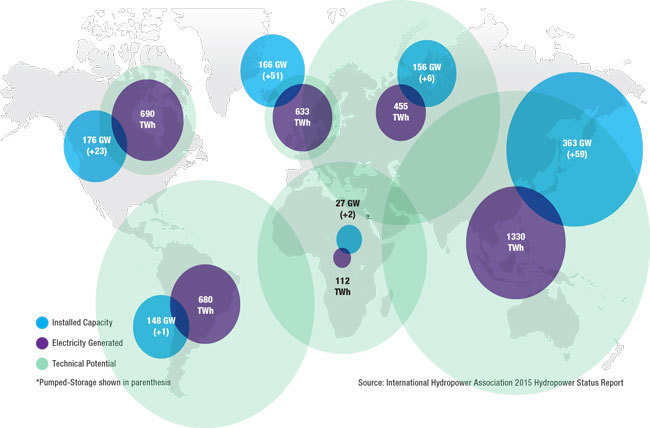 So important is hydropower’s ability to provide cost-effective power on a large scale that the World Bank Group reversed a two-decade decision barring investments into large hydro in 2013, opening doors for significant projects that would have previously been unfeasible for many developers.

Hydropower’s continuing growth around the world is confirmed in reports from a number of multinational industry, watchdog and lending organizations – data from which is compiled here alongside research presented by the International Hydropower Association in its 2016 Hydropower Status Report.

IHA’s 2016 report, which draws on the association’s global hydropower database, shows a worldwide increase of 33.7 GW of new installed capacity in 2015, including 2.5 GW of pumped-storage, bringing the worldwide total to 1,212 GW of hydropower, including 145 GW pumped storage.

The growth reflects trends from locales around the world, with highlights here by region:

While Africa holds about 10% of the globe’s total hydroelectric potential of 270 GW, less than 10% of that potential has been developed. Of that 27 GW, 70% is concentrated in nine countries, including the Democratic Republic of Congo, Egypt, Mozambique, Morocco, Ethiopia, Nigeria, Ghana, Sudan and Zambia.

This disparity and enormous hydroelectric potential have led to the creation of the Programme for Infrastructure Development in Africa (PIDA), spearheaded by the African Union and African Development Bank. The program and others like it push for the creation of pan-African electricity grids through the integration of existing power pools, with energy coming in large part from hydroelectric projects.

Leading the charge to develop this potential is Ethiopia, which has said it wants to increase its hydroelectric capacity by 22 GW by 2030. Further behind are Egypt (2.8 GW by 2020), Uganda (1.2 GW of large and 85 MW of small capacity by 2017), and Morocco, Mozambique and Nigeria – each of which has said it wants to add at least 2 GW of hydropower over the ensuing two decades.

Africa’s capacity will be bolstered significantly in the coming years with the completion of plants like the 6,000 MW Grand Ethiopian Renaissance, as well as new developments at DRC’s Grand Inga site, where there is the potential to install 40 GW.

Developers are also showing a keen interest in smaller, more localized projects as much of rural Africa lacks access to grid infrastructure.

The Asian Development Bank estimates that demand for energy in the East Asia and Pacific regions will more than double by 2035, while need in the southeastern portion of the continent is even higher, with a projected increase in demand of almost 300%.

The uptick is being met in large part by China, which again led the world in new development with more than 19,370 MW of new hydroelectric capacity added in 2015, including 1,230 MW of pumped storage. Additional projects – including the massive 10.2 GW Wudongde, which is expected to be completed by the end of 2021 – will contribute to China’s stated goal of adding 260 GW of conventional and 30 GW of pumped-storage capacity by the end of 2017.

While hydro accounts for 218 GW, including 51 GW of pumped-storage hydropower, it represents only about 10% of the continent’s overall supply of electricity. Still, IHA said, the highest growth rates for hydro remain in Europe’s eastern countries, which are growing fast and have significant hydroelectric potential.

In total, new hydroelectric installations accounted for slightly more than 209 MW in Europe in 2015. At the same time, increasingly stringent renewable portfolio standards have positioned conventional hydro as a key player, with pumped storage also important in helping balance the intermittency of wind and solar generation. In fact, a recent report from the European Commission’s eStorage Project shows the potential for more than 2,291 GWh of new pumped storage hydro, with the greatest opportunity lying in the EU-15, Norway and Switzerland.

Marine energy is also attractingstrong interest in Europe – particularly within the United Kingdom, where MHK sites in Scotland, Wales, Northern Ireland and England remain in development. Ocean power isn’t limited exclusively to the UK, however, as a new test site was inaugurated off France’s west coast in 2015.

Estimates vary, but previous reports from European governments have shown the continent’s waters have the potential to generate between 30 and 50 GW of cumulative marine energy.

Hydropower remains king in Canada, accounting for more than 60% of the country’s total electricity mix. Canada ranks fourth in IHA’s most recent statistics, with 78 GW in total installed capacity. 708 MW of new capacity was built there in 2015, while notable projects like the 1,100 MW Site C, 824 MW Muskrat Falls, 330 MW Amisk, 395-MW Romaine 3, 245-MW Romaine 4 and others continue progressing.

To Canada’s south, federal legislation in the United States continues to streamline the process for hydropower projects – particularly those built on existing infrastructure. Construction of new large plants has, for the most part, fallen out of vogue – minus, perhaps, the completion of four projects this year by American Municipal Power that have a cumulative output capacity of 313 MW – although policy like the Obama Administration’s “Clean Power Plan” could spark further interest in the sector.

Meanwhile, hydropower in Central America remains strong – particularly in Mexico, which saw an increase of 760 MW of hydropower in 2014, and a further 25 MW in 2015. The government of the country has announced plans to construct the 240 MW Chicoasen 2 plant in coming years, while also partnering with Canada’s Manitoba Hydro to learn more about small hydro development.

Drought remains a significant concern for many South American operators, although it hasn’t stopped operators from increasing the continent’s hydroelectric capacity by over 3,800 MW in 2015.

The bulk of this new installed capacity – 2,457 MW – was commissioned in Brazil, which recently saw the first units at both the 11.2 GW Belo Monte and 1.8 GW Teles Pires plants begin operation. An ailing economy and political strife have stifled new development somewhat, but the government still seems keen on developing nearly 8 GW of hydroelectric capacity by 2021.

At the continent’s southern tip, Argentina continues moving forward on a number of projects, including the 1,100 MW Cordon del Plata, 443 MW Los Blancos and 216 MW Portezuelo del Viento, amongst others. Its western neighbor, Chile, is developing the conventional 640 MW Cuervo and 300 MW Espejo de Tarapaca pumped-storage plants. New partnerships with France also aim to help Chile cultivate its marine energy industry via funding and the sharing of knowledge.

Also of note, Colombia added 600 MW, with the majority coming from the 400-MW El Quimbo project.

What it all means

Global perceptions of hydro are constantly changing, as are interpretations regarding what constitutes hydropower. Meanwhile new technologies, improved designs and advances in engineering are redefining how and where projects can be developed.

The 2016 Hydropower Status Report, the International Hydropower Association’s flagship publication on global hydropower development and statistics, was published in May. Built on data from IHA’s global hydropower database, the full report features overviews of recent trends and developments across all regions of the world, in-depth country profiles, as well as features on key topics such as finance, climate resilience and resettlement. You can download the report from www.hydropower.org/publications.