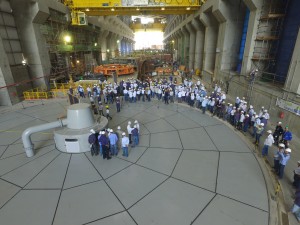 Generating Unit No. 1, located in Belo Monte’s main powerhouse, is a 611.11 MW Francis-type turbine and one of 18 units that will now come on line at a rate of about one every two months.

The test run comes weeks after a Brazilian federal court overturned a suspension of the plant’s operating, which had previously been revoked by a lower court amidst allegations that the developers violated human rights agreements.

Norte Energia said the trials were made possible when water levels in the plant’s main reservoir, located off the Xingu River in Brazil’s northern Para State, reached an acceptable level earlier this month.

The company said work is also progressing on the Belo Monte‘s secondary powerhouse, Pimental, which contributes 233 MW to the complex’s overall capacity.

“In just under a month, we will be generating power commercially in both the enterprise powerhouses,” de Figueriredo said.

All of Belo Monte’s turbines are expected to be in operation in 2019. Once complete, the plant will be the third largest in the world, servicing 60 million people in 17 Brazilian states.