Probable maximum precipitation (PMP) estimate is defined as the maximum depth of precipitation that is physically possible for storm areas and durations in a particular geographical location at specific times of year.

TVA contracted Applied Weather Associates LLC (AWA), to calculate updated PMPs via a 2015, in-depth study (the study). The study incorporates the latest methods, technology and data to address the climate and topography complexities in the Tennessee Valley. This technical article presents the means by which the study results supersede historical values TVA used as reported in four government issued Hydro-meteorological Reports (HMRs 41, 45, 47, and 56) on which PMP were constructed. It should be noted: The U.S. government ceased issuing HMRs in 1999.

In the Tennessee River Basin, TVA operates dams, hydroelectric projects, fossil and nuclear fuel facilities in a domain totaling 41,900 square miles. The domain contains diverse topographic and climatological regions: The Appalachian Plateau on the western portions; the Cumberland Plateau in the middle; and the Appalachian Mountains/Blue Ridge to the east. PMP values must account for the region’s complex meteorology and terrain. 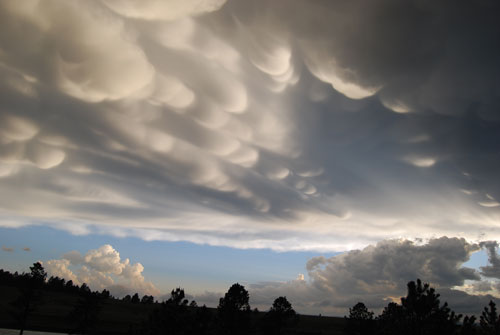 The previous design basis used for dam and nuclear facilities within TVA were specifically developed for different aspects of the overall TVA geographical region:

– HMR 41 released in 1965 provides PMP and TVA precipitation over the Tennessee River basin above Chattanooga;

– HMR 45 released in 1969 provides PMP and TVA precipitation estimates for all drainages up to 3,000 square miles and duration to 72 hours within TVA’s area;

– HMR 47 released in 1973 covers four basins in the Tennessee and Cumberland River watersheds;

– HMR 56 released in 1986 provides PMP and TVA Precipitation estimates for all drainages less than 3,000-square miles within TVA, replacing HMR 45.

The study identified several inconsistencies between the documents, resulting in confusing and sometimes conflicting information from which to make design and operational decisions. Most notable among the issues are the limited number of analyzed storm events, no new storm data since the 1980s, inadequate processes used to address orographic effects (when an air mass approaches a mountain range and is forced upward), inconsistent data and procedures used among the HMRs and outdated procedures used to derive PMP. 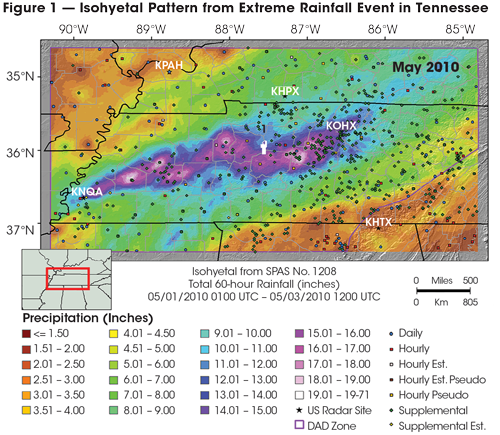 In addition, these outdated documents do not include many significant storm events that could control PMP values, including rainfall events such as the Nashville, May 2010 rainfall event (see Figure 1 on page 46). To address these issues, TVA tasked the study to perform an updated regional PMP analysis and employ methods to rectify these inconsistencies.

Storm-based approach includes identifying extreme storm events that have occurred in regions of similar meteorological and topographical setting relative to any part of the overall TVA region. The study followed the storm-based approach used to develop HMRs, but the update incorporated the latest understanding of meteorological processes leading to extreme rainfall. It also updated the storm database through 2014 by leveraging data from completed site-specific, statewide and regional PMP studies.

PMP depths and TVA rainfall information were provided in geographic information system (GIS) format on a 2.5-square-mile grid and at hourly time steps. The results are being used for numerous hydrologic, dam safety, and nuclear safety analyses and will be used for future dam safety and nuclear projects.

To identify all appropriate storms that could potentially affect PMP values at any location within the overall analyzed domain, the study conducted an exhaustive storm search. This included storms used in previous PMP studies in the region, as well as an updated search of all available data. Results of this analysis were used to develop a short list of 58 storms to determine the PMP and TVA precipitation values.

Each storm identified was analyzed to provide gridded rainfall analysis in hourly increments, along with several other products used for hydrologic evaluations. Thirty-four storms did not previously contain required hourly gridded data and were analyzed using a Storm Precipitation Analysis System (SPAS).1

Storm maximization is the process of increasing rainfall associated with an observed extreme storm under the condition that additional atmospheric moisture could have been available for rainfall production. Maximization is accomplished by increasing surface dewpoints to a climatological maximum and calculating the enhanced rainfall amounts that could be produced. An additional consideration is usually applied that selects the climatological maximum dewpoint for a date two weeks towards the warm season. This procedure assumes the storm could have occurred with the same storm dynamics two weeks earlier or later in the year, when maximum dewpoints (and hence moisture levels) could be higher.

HMR and WMO2 procedures for storm maximization use a representative storm dewpoint as the parameter to represent available moisture to a storm. Observed storm rainfall amounts are maximized using the ratio of precipitable water for the maximum dewpoint to precipitable water for the storm representative dewpoint, assuming a vertically saturated atmosphere. This in-place maximization factor (IPMF) procedure was followed in the study using updated maximum dewpoint climatology.

For storm maximization, average dewpoint values for the appropriate duration (based on when about 90% of the rainfall had accumulated), were used to determine the storm representative dewpoint. Once this value was determined, along with the most representative storm duration (6-, 12-, or 24-hour), the dew point climatology maps3, 4, 5 were used to maximize each event.

Transpositioning, defined in Section 2.4 of HMR 51, is relocating a storm from its original location to the location being analyzed.

Extreme rain events in meteorologically homogeneous regions surrounding a location are an important part of the historical evidence on which a PMP estimate for the location is based. Because most locations have a limited period of record for rainfall data collected, the number of extreme storms that have been observed is limited. Storms that have been observed within similar climate and topographic regions are analyzed and adjusted to provide information describing the storm rainfall as if that storm had occurred over the location being studied (i.e., trading time for space).

The underlying assumption is that storms transpositioned could occur under similar meteorological conditions. To do so properly, the study addressed issues of similarity as they relate to meteorological conditions, moisture availability and topography. This was accomplished by comparing the differences in available moisture between the two locations using the moisture transposition factor and the difference in topography between the two locations using the orographic transposition factor (OTF).

OTF analysis uses many of the same principles as were employed by the HMRs, which used the Storm Separation Method (SSM). In the HMR SSM method, storms were split into their two components, orographically influenced precipitation and non-orographically influenced precipitation (also known as convergence or Free Atmospheric Forced Precipitation). The idea had merit. Unfortunately, no data exists from which to empirically derive the values because the storms used to define the values were already affected by both factors and there was no way to separate them out.

Instead, by using a precipitation frequency climatology, which represents the total effects of topography and storm dynamics at a given location, the results of these two factors as observed in given precipitation events are used. The assumption is that the precipitation frequency climatology at the more rare occurrence intervals and at durations representing PMP-type storms for the location being analyzed reflects how the PMP storm could behave. This same application was recognized by the WMO as a way to quantify the effects of topography on precipitation.6

Once each adjustment factor is determined for each storm analyzed, the study created an Excel spreadsheet for each storm to store original storm data and apply calculations to produce the final total adjusted depth-area-duration (DAD).

These spreadsheets were designed to perform the initial calculation of each of the three adjustment factors, along with the final Total Adjustment Factor (TAF). In addition to the IPMF, moisture transposition factor (MTF), and OTF calculations, each storm’s transpositionability to each grid cell is stored within the spreadsheets. This allows for a conditional statement to determine if the given storm is spatially transpositionable to a given grid cell.

Information such as National Oceanic and Atmospheric Administration Atlas 14 data,7, 8 coordinate pairs, grid point elevation values, equations and the precipitable water lookup table remains constant from storm to storm, and they remain static within the spreadsheet template. The spreadsheet contains a final adjusted rainfall tab that includes the adjustment factors and the TAF for each grid cell. For each storm, a table is exported into a GIS-feature classification for use as input for the PMP evaluation tool. This step is designed to provide the GIS database used to calculate PMP evaluation tool functionality required, independent of the storm adjustment spreadsheets. At any point in the future, new storm feature classifications could be added, removed or edited.

The PMP evaluation tool receives storm TAF-feature classifications and the corresponding DAD tables as input, along with a basin outline feature layer as a model parameter. It then calculates and compares the total adjusted rainfall – for each transpositionable storm, at the grid points of all grid cells, any portion which is within the target basin – and determines the PMP depth for durations of the PMP for each of the three storm types (local, general and tropical).

The study calculated PMP depths by comparing the total adjusted rainfall values for all transpositionable storm events over a given grid point and taking the largest value at each duration by storm type. This process is similar to the envelopment process described in HMR 51 Section 3 in that the largest of all storms values after all adjustments have been applied becomes PMP at each grid point. This is repeated for each hour from 1- through 120-hours at each grid point.

Each storm’s observed rainfall value is adjusted at each grid point by applying a TAF to the SPAS analyzed DAD value corresponding to the target basin area size (in square miles) at the appropriate duration. The TAF is the product of three separate storm adjustment factors: IPMF, MTF and OTF. These calculations are completed for all storms on the short-storm list for every grid point analyzed over the entire domain.

The grid point PMP values are used to compute an average basin PMP depth per duration. Furthermore, the PMP evaluation tool initially distributes each of the PMP depths, as well as the basin average value, according to the specified temporal design criteria for each storm type. Finally, GIS files are output to separate folders for each storm type.

The study leveraged previous and ongoing AWA PMP work in the region. This includes using previously analyzed rainfall events from other PMP projects, using the updated maximum dewpoint climatologies in the maximization and transpositioning processes, applying updated procedures to quantify orographics and employing the extensive experience and meteorological knowledge from the previous and ongoing work.

The study used storm database rainfall amounts associated with the appropriate extreme storm events adjusted for each basin using procedures consistent with methods presented in the HMRs and WMO.

The study results produced updated PMP values being derived on an hourly basis extending from 1- through 120-hours and by the three PMP storm types that affect TVA: local, tropical, and general. In addition, the databases developed and analyzed provide a quantifiable and reproducible set of data from which engineers and regulators can make more informed decisions, with appropriate understanding of how the values were derived, the uncertainty involved and the appropriate application of these data.