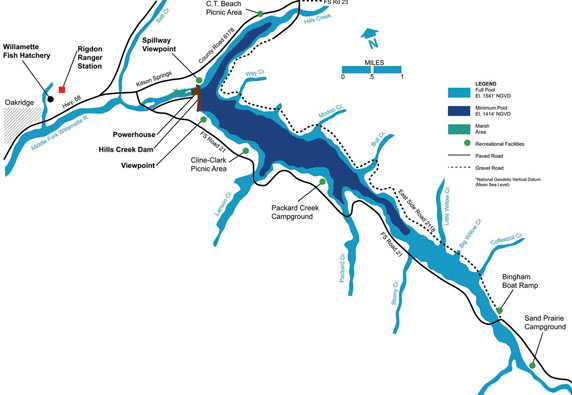 The U.S. Army Corps of Engineers seeks bids to rehabilitate three spillway gates at the 34.5 MW Hills Creek Dam hydro project, on the Middle Fork of the Willamette River in Oregon. Bids are due Aug. 17.

The Corps’ Portland District awarded a contract to Andritz Hydro in 2011 to supply two turbine runners and hydro-mechanical equipment and to rewind both generators at Hills Creek. The Corps also took bids in 2011 for sampling and abatement of asbestos and lead at 21 hydroelectric projects in Oregon including Hills Creek. Lehoczky/Vanguard Joint Venture received a contract in 2006 for a generator uprate study of the project.

The Portland District now seeks bids from small businesses to fully rehabilitate three spillway gates at Hills Creek to restore integrity and reliability in accordance with current codes, design criteria and standards. The work includes full rehabilitation of one gate system including mechanical and hoist machinery and system and electrical controls with the option of rehabilitating the second and third gates.

A solicitation notice may be obtained from the Federal Business Opportunities Internet site, www.fbo.gov, by entering solicitation No. W9127N15R0028 in the “Keyword/Solicitation #” box.