Chile’s demand for electrical power is set to double to more than 30 GW by 2030. And with more than 4,000 km of Pacific coastline exposed to consistently powerful waves and multiple tidal streams, Chile is poised to make use of its marine renewable energy resources.

Chile’s location and geography provide it with vast, untapped marine energy resources located close to centers of power demand. The country stretches from the Atacama Desert in the north to the Magellan Strait in the south, equivalent to the distance between Nigeria and Norway.

Estimates vary, but the total wave resource is likely to exceed 200 GW. Much of this power is located off the coast of Patagonia and the practically extractable power will be a fraction of this value, yet UK marine energy specialists Aquatera estimate that with the right support policies, Chile could install more than 300 MW of wave power generation capacity by 2030.

The tidal resource is only about 1% of the wave resource, but Chile has many attractive sites. With tidal stream turbines closer to commercialization than wave devices, according to Aquatera, tidal projects may have a head start in Chile and could reach 150 MW of capacity by the mid-2020s.

The situation in Chile

The U.S. Energy Information Administration says Chile is South America’s fifth largest consumer of energy but it only produces a relatively minor amount of fossil fuels and imported 97% of its energy consumption in 2012. To reduce dependence on imports, Chile seeks to develop greater domestic energy production.

Aquatera says that politically, the Chilean government promotes electricity generation from “non-conventional renewables” (this excludes large hydropower) through a system of fines for larger electricity generating companies, which are required to increase their production of power from renewables year on year. However, these incentives are technology neutral, so the cheapest forms of generation (wind, small hydro and solar) enter the market first. Despite this, there are a number of R&D, technology transfer and community development funds that could be used to support marine energy projects. 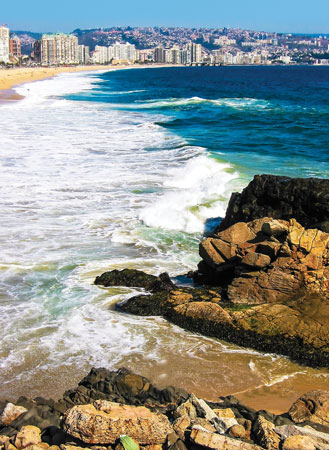 In February 2014, we reported on HydroWorld.com that the Inter-American Development Bank called for consultants to support development of two pilot marine energy projects in the country. However, with a change of government and a renewed focus on fast-tracking solar and wind projects, these initiatives were not taken forward.

In 2014, Chilean economic development agency CORFO selected DCNS and Enel Green Power to develop MERIC, Chile’s Marine Energy Research and Innovation Center. With about $20 million in cash and in-kind funding, the center will work with Chilean universities and companies to carry out marine renewable energy R&D and conduct studies to identify the first sites where marine energy technologies could be installed. It is hoped that by 2019, MERIC will have the experience and consolidated infrastructure to allow it to provide services to local and international industry interested in testing marine renewable energy technologies in the Chilean environment.

Aquatera released its report, Recommendations for Chile’s Marine Energy Strategy – A Roadmap for Development, in 2014. This study, available at bit.ly/1UUDHdc, was commissioned by the British Embassy in Santiago and was developed by Aquatera in partnership with the Renewable Energy Division of the Chilean Ministry of Energy and other local partners.

This study was the first to produce detailed reports on the marine energy development potential of Chile’s coastal regions. Aquatera identified that Chile has vast potential for generating power from waves and much smaller but still significant tidal potential. With input from international industry experts and through workshops and interviews held in nine of Chile’s 15 regions, Aquatera produced a set of recommendations to support the development of marine energy strategy. These included measures such as including wave and tidal energy in the regulations for securing marine concessions, focusing R&D activity on areas of existing strengths, targeting niche markets with high energy costs, and securing financial support for early demonstration projects.

The report indicates hydropower has a capacity factor of 45% to 65%. Wave energy in Chile is listed with a capacity factor of 50% (about 20% higher than in Europe) and tidal energy 30%. This compares favorably with onshore wind at 30% and solar energy at 25%. In addition, Aquatera points out that waves and tidal are more predictable than wind and solar and more densely energetic.

The report also acknowledges the challenges. Chief among these is that wave and tidal power technologies are in the early development stage and the cost of power from these sources is higher than Chilean grid electricity prices. Nonetheless, the report identifies niche markets where wave and tidal power may be able to compete, for example in remote locations where energy costs may be three or four times those inside the grid, and where the power can be used more directly (in wave-powered water pumping). Aquatera highlights that the challenge of wave energy is to generate power from the low-speed and high-force oscillations of waves, which is a more complex problem with apparently a more diverse range of power conversion solutions than for tidal power.

The report says, “The fact that marine energy has yet to be commercialized means that Chile has a chance to play a development role and establish a manufacturing capacity which would be difficult to achieve in more established industries such as wind and solar, where equipment is largely imported.” Detailed recommendations are outlined, covering actions in areas such as government strategy, regulatory framework, R&D and innovation, infrastructure and supply chain development, and finance. The Chilean government has set up MERIC, but progress in other areas has been limited.

There has been a continued increase in marine energy activity in Chile since the report was published. Marine renewable energy association ADEMAR has seen its membership grow and has organized marine energy events. Chile’s technology developers and universities continue to develop prototypes and research areas. International technology developers have been studying the Chilean market to identify potential project opportunities.

Wind and solar have shown how the energy cost from sources not previously considered viable can drop faster than expected. With a growing demand for energy and enormous untapped resources, it can surely only be a matter of time before Chile generates a significant amount of power from waves and tides.

Coming up in 2016 is an opportunity to learn in person about the marine hydrokinetic industry. On July 27, the MHK Technical Seminar in Minneapolis, Minn., U.S., will cover a variety of technical topics and is designed to bring attendees up-to-date on the technical aspects of this emerging market.

There is a unique opportunity in that this seminar is co-located with HydroVision International, the world’s largest hydropower industry event with more than 3,000 attendees from more than 50 countries. This brings together the conventional hydro and MHK industries to discuss common ground and share ideas. Learn more at http://bit.ly/1ry1Mdw.

MHK around the world

Activity is being reported nearly daily in the MHK market worldwide. Below are recent stories from HydroWorld.com: