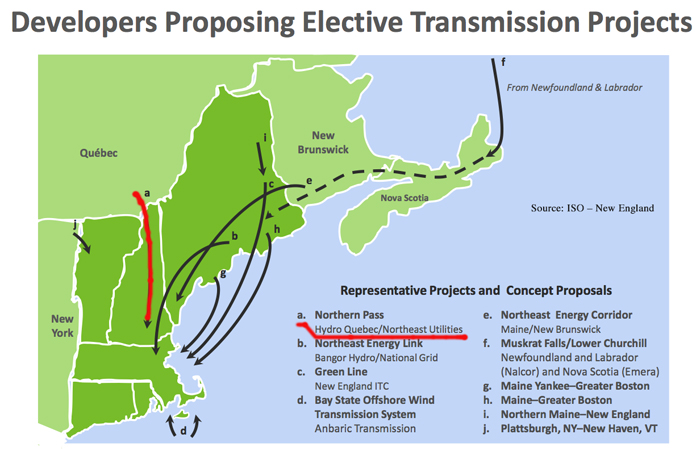 The US$1.6 billion Northern Pass transmission line that could tap into 1,096 MW from Canada’s largest hydropower producer, HydroQuebec, was approved Dec. 7, by a 6-0 vote of New Hampshire’s Site Evaluation Committee [SEC].

Issues remain, but if a federal permit is issued and the state SEC approves the plan, construction could begin in 2017 and the power to start flowing in spring 2019.

Once the SEC issues its written decision on the completeness question, expected by Dec. 18, a one-year clock starts ticking for the SEC to complete its review. Steps along the way include more public hearings in each of the five counties touched by the project.

The panel accepted the application by Hartford, Connecticut-based Eversource to run a 192-mile transmission line from Pittsburg to Deerfield, carrying energy from Canada to Southern New England markets.

Sixty miles of the line will be buried and project supporters say it will create jobs and lower costs in a region that routinely pays the nation’s highest average cost for electricity. The U.S. Energy Information Administration reports New England consumers will pay 19.29 cents per kWH in 2015, more than 50% higher than the national average of 12.56 cents.

“The SEC’s [Site Evaluation Committee’s] thorough review process continues with a series of public information sessions and other hearings early in the year that will allow people from across the state to comment and directly participate,” the company said. “We look forward to continuing our conversations with New Hampshire residents, and working together to secure our energy future.”

Opponents have argued the project will hurt property values, tourism and the environment.

The Society for the Protection of New Hampshire Forests and New England Power Generators Association had asked the SEC to declare the Eversource application incomplete, saying the company has not provided supporting data it has full control of land intended for the power line.

The forest society has also sued, claiming Eversource does not have the right to use a highway right-of-way that goes through land owned by the society. The state’s Department of Environmental Services also submitted comments saying it believed the application was incomplete.

“The SEC’s action was disappointing but not altogether unexpected,” society spokesman Jack Savage said. “As they acknowledged, certain property rights are in dispute. The question is when and how those property right issues are taken into consideration by the SEC, and the answer to that question remains.”