Although herbicidal spraying was an acceptable method to control vegetation near the 417-MW Safe Harbor Hydroelectric Facility, Brookfield Renewable decided to invest in a better option.

When the status quo just wasn’t good enough, Brookfield Renewable went above and beyond to solve a problem. Herbicides had been sprayed to control vegetation at the Conejohela Flats for years, but it wasn’t ideal to have chemicals washing into the water and flowing downstream to the Chesapeake Bay. So Brookfield Renewable spent considerable time – and money – developing a better option. 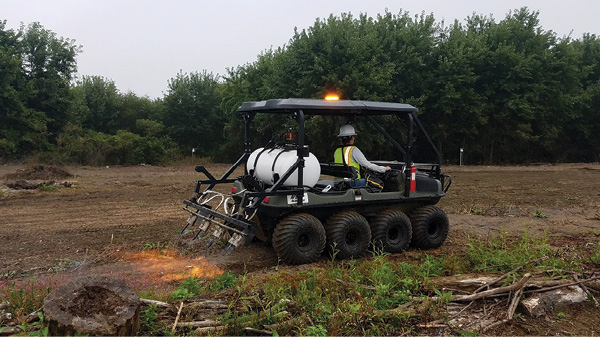 This amphibious vehicle was used to burn the vegetation at Conejohela Flats, rather than using herbicidal spraying.

The Susquehanna River in the eastern U.S. has long been noted as one of the most polluted waterways in the country, with experts pointing to runoff from the agricultural industry – including products like fertilizer and pesticides – as being a major contributor to this issue. Also, as the Susquehanna flows into the Chesapeake Bay, it has been alluded to as the largest factor that needs to be addressed when dealing with the long-standing pollution issues the bay has faced, which have garnered national attention and a high profile.

Before Brookfield Renewable acquired the 417-MW Safe Harbor Hydroelectric Facility in 2014, herbicidal spraying took place at an area owned by the Safe Harbor Water Power Corporation, known as the Conejohela Flats. This spraying, a practice approved by state agencies, was done to clear vegetation and create an appealing habitat for migrating shorebirds that have made these flats an annual stop, attracting bird watchers from the region.

The herbicide often ended up in the water, either through overage of spraying or because of varying water levels that would occasionally lead to water rising on the flats and washing away the herbicidal spray. Although the herbicide was deemed to be “safe” for use on and around water, the Brookfield Renewable team felt we needed to find a more natural, suitable and sustainable solution that wouldn’t have the potential impact on the waterway that spraying could have. 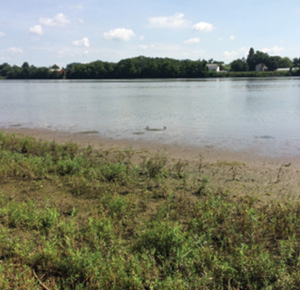 This is an example of the vegetation at Conejohela Flats that needs to be controlled.

We were presented with some unique challenges. The first was working with expert biologists to determine how we could achieve our goal without the impact on the environment and the waterway that spraying could potentially have.

Working internally and with consultants, Brookfield Renewable decided to use an “amphibious vehicle” that can navigate the muddy lands on the islands and equip it with a system to essentially boil vegetation from the inside out. Once this idea was developed, other challenges arose, such as seeking “buy-in” from a local bird watching expert and the U.S. Fish and Wildlife Service, which viewed the flats as an integral area for migrating shorebirds to stop and feed.

The vehicle was developed after finding an all-purpose, truly amphibious vehicle on the open market. Through study both internally and by our consultants, it was determined that a method that consisted of essentially boiling the vegetation was safe for in and around water. After significant testing and trial runs, the mounting system and safety feature were made effective. The vehicle is in full use and will continue to be used for seasons to come.

Another challenge was ensuring that the vehicle and method met our stringent safety measure, and also that we were able to work with the contractor to fix logistical issues, such as getting the vehicle out to the islands safely and working on the vehicle to get it to navigate the challenging mud flats area. Additionally, the contractors needed significant training both on safety precautions and using the vehicle. 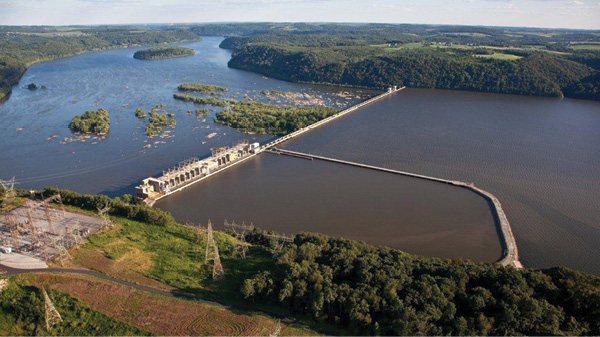 The 417-MW Safe Harbor hydropower project is on the Susequhanna River, upstream from the Chesapeake Bay.

We were able to control vegetation as effectively as previously accomplished with herbicidal spraying. In terms of cost-effectiveness, the cost of developing this strategy, utilizing and training contractors, purchasing the equipment/vehicle, etc., of course exceeded the cost of spraying an herbicide. But our goal was to develop a method that would enable us to cease spraying herbicide in and around a waterway that is a regional asset used by tens of thousands of recreators in the most sustainable way possible for the environment and our business.

The effort was a huge success and garnered positive feedback from stakeholders across the board.

“Brookfield Renewable is to be commended for eliminating the use of herbicides in maintaining migratory bird stopover habitat on the Conejohela Flats, which have been designated a National Audubon Society Important Bird Area and a Natural Heritage Area of statewide significance,” said Rick McCorkle, fish and wildlife biologist with USFWS. “Brookfield Renewable has adopted an innovative approach to managing the flats for migrating shorebirds by using an amphibious vehicle to burn the vegetation instead of using herbicides. This approach is much better for water quality and the environment. We have also appreciated Brookfield Renewable’s efforts to coordinate this new approach with stakeholders, including hosting early meetings with the resource agencies and other interested parties and providing site tours and demonstrations of this new and innovative approach.”

It is this very approach to problem solving that Brookfield Renewable employs at all of its facilities when knowing that there is never a one-size-fits-all approach to any situation.

This work earned Brookfield Renewable an Outstanding Stewards of America’s Waters award from the National Hydropower Association in 2018.