Editor’s Note: The below data comes from the section on pumped storage hydropower (PSH) in the International Energy Agency’s recently released Renewables 2018 report. It is reprinted here with permission.

Global PSH additions declined to 2.7 GW in 2017, returning to the 20-year annual average after a record 7.2 GW1 in 2016 resulted from exceptionally high deployment in China and Europe. China continued to lead global growth in 2017, accounting for over 78% (2 GW) of new commissioned units. As a result, China attained 29 GW of cumulative capacity, surpassing Japan to become the country with the most PSH capacity installed. By the end of 2017, global cumulative installed capacity had reached 153 GW, i.e. 12% of total hydropower capacity, with over 80% of it located in Europe, China, Japan and the United States.

In the next five years, PSH capacity is forecast to increase almost one-fifth (26 GW), mostly in response to greater needs for system flexibility to integrate variable renewables in China, Asia-Pacific countries, Europe and the MENA [Middle East and North Africa] region (Figure 5.16). The forecast is revised up from Renewables 2017 due to recent project developments in China, Australia and India. However, financing new PSH projects and operating existing ones profitably remain key challenges, particularly in markets in which revenues from energy arbitrage are uncertain, grid fees exist, and/or remuneration mechanisms that value the system services provided by PSH are lacking. 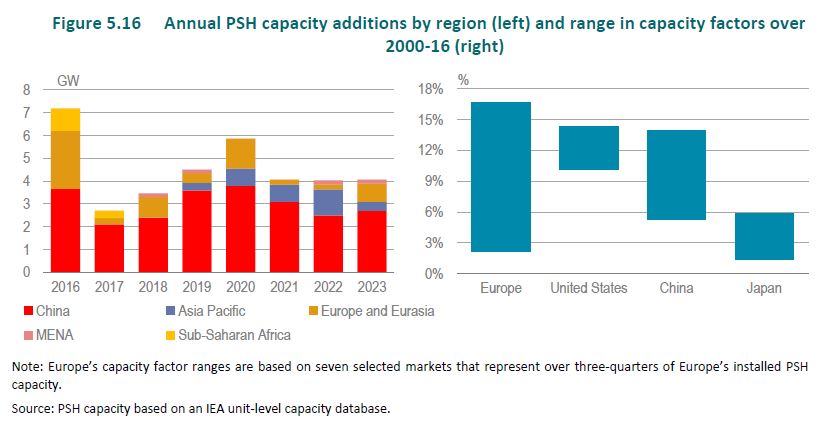 The largest growth happens in China, which is expected to install 18 GW in the next five years to meet its 13th Five-Year Plan (FYP) target of 20 GW by 2020. The main driver for PSH development in China is the increased need for system flexibility, particularly to reduce wind electricity curtailment and optimise coal and nuclear plant operations. Due to current regulations that consider PSH part of the transmission system rather than a generating asset, most PSH capacity growth is expected to come from China’s state-owned grid companies at sites earmarked in network expansion plans. As such, the pace of PSH capacity expansion in the next five years will depend on the pace of project implementation and network upgrades by the grid companies.

Europe’s PSH capacity is expected to grow 2.8 GW by 2023 from additions in Switzerland, Portugal, Austria, the United Kingdom, and Germany. Suitable topography and a need for system flexibility to balance increasing wind and PV generation are the main drivers for growth. However, the economic attractiveness of PSH in the European market is a key challenge to deployment due to rising uncertainty over the business case for energy arbitrage and insufficient alternative revenue streams from other markets such as ancillary services and balancing or capacity markets. Most growth is therefore expected to come from utilities with majority state ownership.

Outside of China and Europe, the Asia-Pacific countries of India, Philippines, Australia, and Thailand are expected to be responsible for 13% of global PSH growth. Power system reliability needs, coupled with coal plant retirements, increasing renewables-based generation, high electricity prices and recently announced government support for over 750 megawatts (MW) of PSH have created a robust project pipeline in Australia. The outlook for PSH is also improving in the MENA region: Morocco and Israel together are expected to add 650 MW of capacity, while the United Arab Emirates and Egypt have both recently announced plans to develop PSH.

By 2023, electricity generation from PSH rises by one-quarter to reach 146 TWh, although the average operating hours of the PSH fleet are considerably uncertain and the range of capacity factors is wide due to the variability of market conditions (Figure 5.16). In liberalised or partially liberalized markets such as Europe and the United States, generating decisions will be dictated by plant profitability. In Europe, these prospects are based mostly on the difference between peak and offpeak prices, a spread that is becoming increasingly difficult to predict. Consequently, generation from some PSH plants may decline in some markets over the next six years: in Germany, one PSH plant owner recently announced that operating hours in certain plants would be reduced to preserve profitability. In the United States, PSH generation going forward will also depend on its competitiveness with other flexible sources such as natural gas-fired plants.

In China, the operating hours of PSH plants will depend on how grid operators decide to dispatch them in the most cost-effective way to optimise system operations. Historically, PSH plants have been under-utilised because previous tariff regimes failed to incentivise plant operation (Zhang et al., 2015). As a result, capacity factors for the fleet were relatively low (6-8%) from 2010 to 2015. However, in 2016, the fleet average reached 14%, suggesting the potential for higher PSH generation over the next five years, depending on overall power demand, fleet profile and regional grid interconnectedness.

1Global annual PSH additions for 2016 were revised upwards from the 5.8 GW quoted in Renewables 2017 to reflect revisions to Portugal and Switzerland’s official statistics for installed capacity in 2016 submitted to the IEA.