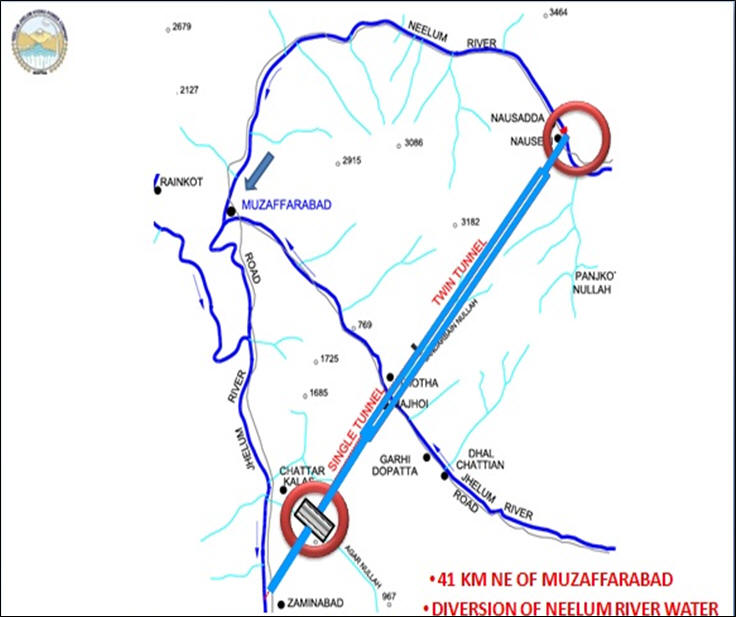 Both Pakistan’s 969-MW Neelum-Jhelum hydroelectric project and India’s 330-MW Kishenganga hydropower project are being built on tributaries to the Neelum River (Kishenganga River in India).

According to interpretation of the 1960 Indus Water Treaty between India and Pakistan, the country that completes its project first will have priority rights to the Neelum/Kishengana River’s waters.

India’s US$773 million Kishenganga hydroelectric project began in 2008 and the scheme consists of a concrete-faced rockfill dam 37 meters in height to divert water from the Kishenganga River (Neelum River in Pakistan). The water delivery system is a 24 kilometers long headrace tunnel that uses a 1,000 meters long inclined pressure shaft 4 meters in diameter to send water to three 110-MW Pelton turbine-generator units in an underground powerhouse at Bandipur.

Contractors completed excavation of Kishenganga’s tailrace tunnel in September 2014 and completion is scheduled for November 2016.

Funding issues continue to delay the completion of Neelum-Jhelum, originally scheduled to begin generating power in 2015 that might push back its commissioning date to sometime in 2016, according to the Pakistani Water and Power Development Authority (WAPDA).

Some of the potential international funding sources for the project, according to published reports, have refused to provide financial backing because the project is being built on the Neelum River in Pakistan-occupied Kashmir.

The region of Kashmir is in an area of which territorial control is in dispute between India and Pakistan.

Neelum-Jhelum is part of a run-of-the-river scheme designed to divert water from the Neelum River to a power station on the Jhelum River. The power station is located in Azad Kashmir, 22 km south of Muzaffarabad, Azad Jammu and Kashmir in Pakistan.

So far, US$2.68 billion has been spent on the project that is 69% complete. On Jan. 13, the project director, retired Pakistan Army Lt. Gen. Muhammad Zubair, briefed the Pakistan Senate Standing Committee on Kashmir Affairs regarding progress at the WAPDA development. Zubair said its total cost has risen from US$2 billion to almost US$4.5 billion.

According to Zubair, the Neelum-Jhelum project has already received US$587 million through a project surcharge, and the charge is expected to provide an additional US$354 million during the next two years.

In addition to a US$448 million loan Neelum-Jhelum received from the Export-Import Bank of China in May 2012, the China Gezhouba Group of Companies is providing the project with additional workers to expedite dam construction.

WAPDA raised close to US$150 million for the plant by issuing term finance certificates in October 2012, following a loan agreement signed with Saudi Arabia worth another US$100 million at the end of September. OPEC then made a contribution to the project by providing a US$50 million cash infusion in October 2013.

If funding is received as planned, WAPDA says it should see the project begin generating power in November 2016.