Measuring nearly 8 km in length, the Oosterschelde barrier is a special dam that connects the Zeeland Islands of Schouwen-Duiveland and Noord-Beveland. 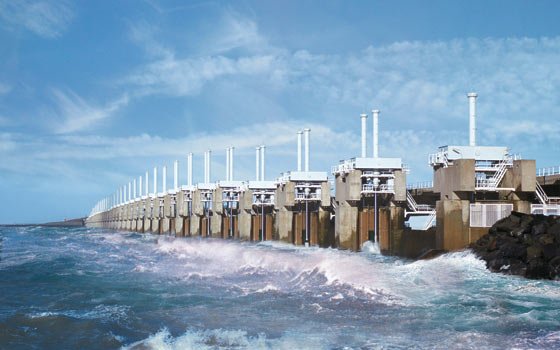 It is essentially a long collection of very large valves that can be closed against storm surges. The Oosterschelde barrier part of the Delta Works series of dams and storm surge barriers designed to protect the Netherlands from flooding caused by the North Sea. The barrier was built to protect the Zeeland region from the sea after the North Sea Flood in 1953.

The T2 turbines are fitted with bi-directional rotor blades and the turbines generate electricity by harnessing energy from the ebb and flow of the North Sea through the storm surge barrier. The turbines consist of a permanent magnet direct drive generator and patented bi-directional reversible rotor blades design, developed, manufactured and installed in close cooperation with major industry partners. 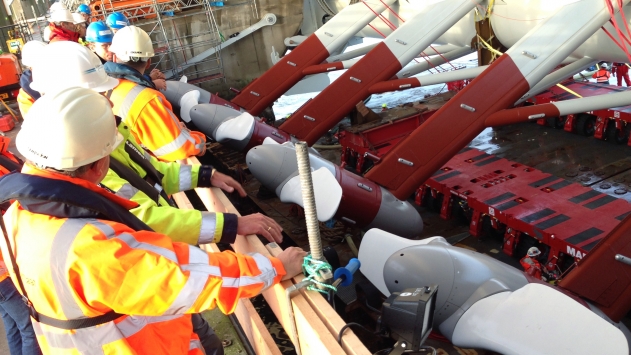 The 50-meter-long by 20-meter-wide tidal power plant was placed on a floating pontoon designed and built by Netherlands-based Huisman, a company that manufactures heavy equipment for offshore applications. The array was combined with lifters and installed between pillars in place under the Oosterschelde barrier.

Strukton has also been actively involved in the project planning from the outset and will be responsible for project management during installation. Another partner in the installation project is Mammoet, while Zeeland companies Istimewa Elektrotechniek, Van der Straaten and Hillebrand also play an important role in terms of the electro-technical installation and steel structures.

Now that the Tocardo T2 installation is complete, the location is a combination of water defenses and hydroelectric power. 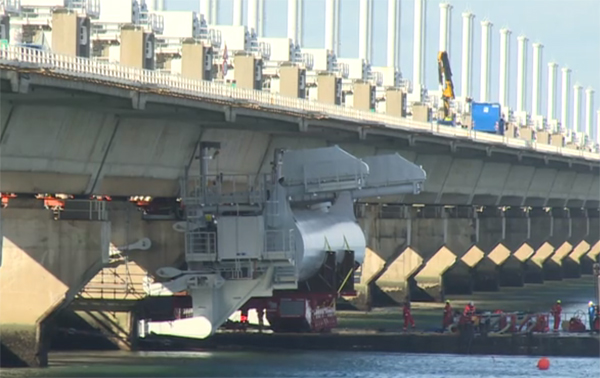 “This project marks an important step in the development of tidal energy. Tidal technology is innovative and could grow into a significant Dutch export product. The export expectation of tidal energy is more than 200 GW,” said Tocardo’s Chief Executive Officer Hans van Breugel.

“With our turbines in the Eastern Scheldt storm surge barrier, we can now show the world what tidal energy is all about: providing a clean and reliable source of energy that could fulfil 10-20% of the world’s electricity needs.”

The province of Zeeland provided a significant financial contribution to the project. Provincial Rep. Ben de Reu said, “Zeeland is surrounded by water. We are the only province with land in the sea, which is why tidal energy is such a good match for us.”

This project also received funding from the European Regional Development Fund, the Dutch government and the province of Zeeland.